At least two people were killed and 370 injured when a magnitude 5.7 earthquake the province of North Khorasan in the northeast of Iran, state media reported.

Saturday’s quake, which killed a 54-year-old woman and a teenage girl, jolted the town of Pishqaleh, a farming region close to the Turkmenistan border with a population of about 2,000 people.

The US Geological Survey said the earthquake occurred at a depth of 12.5km. The earthquake led to a power outage and state TV reports said the quake damaged several buildings in nearby villages.

Managing Director of North Khorasan Red Crescent Society, Hassan Shakouri, said that 37 search-and-rescue teams were sent to the quake-hit region immediately to save victims of the deadly tremor.

He added that 80 percent of the injured have been relocated to tents.

Nearly 177 injured were hospitalised and 223 more received medical aid on the spot, according to rescue officials.

“The rescue operations are about to finish and there seems to be no need to ask for further aid from other provinces,” Esmail Bahman Abadi, Deputy Head of Razavi Khorasan rescue team told the Islamic Republic News Agency (IRNA).

The earthquake’s aftermath has blocked access to several villages and locals have been asked to sleep outdoors over the probability of aftershocks.

Iran is situated on major fault lines and has suffered several devastating earthquakes in recent years, including a 6.6-magnitude earthquake in 2003 which flattened the historic southeastern city of Bam and killed more than 26,000 people. 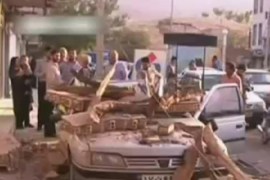 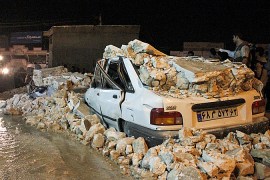 At least seven are killed and 30 injured after 5.7 magnitude earthquake 60 kilometres from Bushehr.