Four civilians have been killed after rebel forces in eastern Ukraine fired artillery rounds on the government-held town of Avdiyivka, the Kiev-appointed head of the conflict-riven Donetsk region said.

The Ukrainian military said in a statement that Saturday’s shelling had been carried out by rebels using artillery banned under the terms of the Minsk peace deal.

“A shell hit the courtyard of a private house. Three women and one man perished,” Pavlo Zhebrivskiy, the Donetsk official, said in a Facebook post on Saturday.

He added that another man with serious wounds had been taken to hospital.

Shelling continues in eastern Ukraine despite a ceasefire agreement signed in February 2015 in Minsk that aims to end the conflict between Ukrainian government forces and the rebels.

Each side accuses the other of violating the truce.

There was no comment by the rebels on the accusations, but a news agency linked to the separatists reported that two civilians on the other side of the frontline had been wounded.

Last month, a paramedic working for the European security watchdog OSCE’s monitoring mission in eastern Ukraine was killed and two others were injured when their vehicle struck a mine in a rebel-controlled area.

Fighting between the pro-Russian separatists and government forces first broke out in April 2014 after a pro-European uprising in Kiev removed Ukraine’s Moscow-backed president.

About 10,000 people have been killed in the three-year conflict.

During a recent state visit to Russia, German Chancellor Angela Merkel and Russian President Vladimir Putin confirmed their commitment to the Minsk agreement.

Merkel stressed that “implementation is a problem, not the agreement itself”.

The Minsk accord was signed by Ukraine, Russia, Germany and France in February 2015 in the Belarusian capital to stop the fighting and withdraw heavy weapons 15km on either side of the frontline.

It also says local elections must be held in the breakaway regions of Donetsk and Luhansk.

“We cannot change that deal and make new plans just because we cannot enforce basic agreements,” Putin said, adding that the Kiev government “lost its chance of resolving this conflict a couple of years ago”.

“Ukraine should be given access to its own state border,” Merkel had said, stressing the need to hold local elections in the separatist regions that would lead to “a legitimate leadership within Donetsk and Luhansk”. 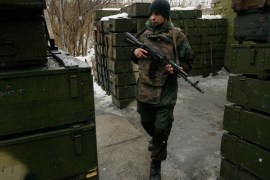 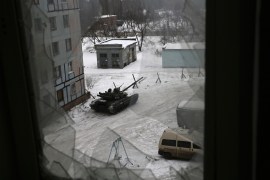