US President Donald Trump said on Thursday that he always intended to fire FBI Director James Comey, contradicting earlier White House statements that he acted on the recommendation of top justice officials.

“I was going to fire him regardless of recommendations,” Trump told NBC in an interview, after days in which the White House has struggled to convince Congress members and the US public that the move was not politically motivated.

“I was going to fire Comey. My decision,” he added.

Trump called Comey a “showboat” and a “grandstander”, while admitting that he had asked the FBI chief to tell him if he was under investigation.

“Frankly, I’m offended at the president’s comments,” Warner told reporters. “This is a continuing pattern of disrespecting the men and women who serve in our intelligence community.”

Trump ignited a political firestorm with his abrupt decision to fire Comey on Tuesday , with critics assailing him for removing the director in the middle of an FBI investigation into alleged Russian meddling in the 2016 US election and possible collusion between Moscow and the Trump presidential campaign.

Trump said Comey had given him assurances on three occasions that he was not personally under investigation; twice in phone calls and once in a dinner he had with Comey, in which, according to Trump, the FBI director had made the case to stay on as head of the FBI.

Al Jazeera’s James Bays, reporting from Washington, said that, if true, this would widely be perceived as inappropriate behaviour.

Democrats have ramped up calls for an independent investigation into the Russia issue, and some of the president’s fellow Republicans have also said they were concerned about the timing of the move.

OPINION: Is America dying or is it being born again?

The White House has said Comey’s firing was unrelated to the Russia investigation and followed a meeting on Monday between Trump and Attorney General Jeff Sessions and Deputy Attorney General Rod Rosenstein.

The administration has given a series of varying accounts for what led the president to make his move.

“What the White House was saying on why Comey was fired on Tuesday was different from Wednesday and is now different again,” said Bays.

“This matters because White House officials have been saying things that appear now not be true … [and do not] now match the current White House position.”

The initial explanation on Tuesday was that Comey had mishandled the agency’s election-year investigation into former Democratic presidential nominee Hillary Clinton’s use of a private email server while she was secretary of state.

Rosenstein detailed Comey’s actions on this in a memo that the administration circulated on Tuesday, along with a memo from Sessions and Trump’s own brief statement that he was dismissing Comey.

But a letter by Trump to Comey on Tuesday made no mention of the Clinton email scandal, appearing instead to refer to the Russia probe.

Trump asserted in the letter on Tuesday that Comey had told him three times that he was not a target – though the FBI has stated unequivocally that the president’s campaign and his associates are facing scrutiny.

Trump told reporters on Wednesday that he fired the director because he was not doing a good job, while Vice President Mike Pence said Comey was fired because he had lost the confidence of the American people.

White House officials said on Wednesday that Trump’s anger at Comey had been building for months but a turning point came when the FBI chief refused to preview for top Trump aides his planned testimony to a May 3 senate hearing on the Clinton email issue – a move Trump and his aides took it as an act of insubordination.

Before he axed Comey, Trump had publicly expressed frustration with the FBI and Congressional investigations into the Russia matter.

Moscow has denied any such meddling and the Trump administration denies allegations of collusion with Russia.

According to US media reports, Comey told politicians within the past few days that he had asked the justice department to make additional resources available – mainly more staffing – for the Russia investigation.

Comey informed politicians of that request after the Senate Intelligence Committee, conducting its own investigation, asked the FBI to speed up its inquiry, a source told the Reuters news agency. 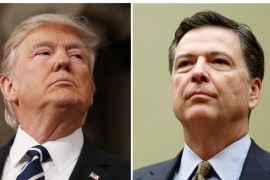