Gunmen shot and killed a prominent Mexican activist who spent years searching for her missing daughter and organised others to looked for “disappeared” people in the Mexico’s northern state of Tamaulipas, authorities said.

Miriam Rodriguez was shot a number of times on Wednesday and died en route to hospital, local civic society group Citizen Community in Search of the Disappeared in Tamaulipas, a group Rodriguez belonged, said in a statement.

The United Nations human rights office in Mexico condemned the attack and called on the government to ensure that Rodriguez’s murder is “properly investigated … and does not remain in impunity”.

It added that it was “even more chilling” that Rodriguez’s death took place on Mexico’s Mother’s Day, a day it said has in recent years become an emblem of the fight for justice of the disappeared.

Rodriguez began a search for her daughter after she went missing in 2014. She eventually found her remains in the Tamaulipas town of San Fernando, according to Citizen Community.

Months later she warned authorities about the perpetrators of the crime, which eventually led to their arrest, the group said in a statement.

He added that nine people had been put on trial for her daughter’s kidnapping and murder.

Barrios’ office denied reports that a man blamed by Rodriguez for her daughter’s murder remained free after escaping from prison. The man, who has been charged but not yet tried, was part of a prison break of 29 inmates in March, but was recaptured almost immediately, it said.

The number of people in Mexico who have disappeared under suspicious circumstances, often related to drug violence, rose to 30,000 by the end of 2016, with Tamaulipas registering 5,563 missing, the highest state total, according to Mexico’s national registry of data on missing persons.

More than 100,000 people have died in drug-related violence in Mexico in the past decade.

Amnesty International said in a statement that Mexico has become “a very dangerous place for those who have the courage to devote their lives to search for missing persons.

“The nightmare they face not knowing the fate or whereabouts of their relatives and the dangers they face in their work, which they perform given the negligent response from the authorities, is alarming.”

On Twitter, Tamaulipas Governor Francisco Cabeza de Vaca said the government will “not allow the death of Miriam Rodriguez to be another statistic”. 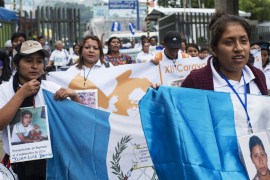 An annual pilgrimage in which the relatives of the missing follow the steps of their loved ones through Mexico. 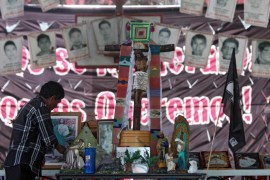 Thousands gather in Mexico City to mark two years since 43 students disappeared on their way to a protest in Iguala.