Gunfire has erupted in several cities across the Ivory Coast, including the military headquarters in the commercial capital Abidjan, as anger spread following a decision by some leaders of a group of mutineers to drop demands for bonuses.

The protests on Friday by soldiers, most of them ex-rebel fighters who helped bring President Alassane Ouattara to power, began in the second largest city, Bouake, overnight before spreading to Abidjan and the northern town of Odienne.

The unrest broke out hours after national television broadcast a ceremony in which a spokesman for 8,400 mutinous soldiers apologised to Ouattara for a rebellion in January, and dropped demands for extra pay.

By Friday morning, disgruntled soldiers, firing guns in the air, had surrounded the military headquarters in Abidjan. Later in the day, armed soldiers sealed off all roads leading into Odienne.

“That’s not what they were meant to say,” one of the mutiny leaders in Bouake, who asked not to be named, told the Reuters news agency, referring to Thursday’s talks.

“Soldiers are at the entrances to the city. We won’t close it off for the moment … Other soldiers are also deployed inside the city.”

The revolt prompted a new meeting between Ouattara, defence officials and mutineers on Friday.

The January mutiny erupted in Bouake, spread to nine other cities, and briefly brought the country to a standstill.

The government then agreed to a deal that provided amnesty for the mutineers and agreed to pay each soldier 12m CFA francs ($19,950). The soldiers received 5m francs ($8,370) in January, and were due to get the rest of the sum this month.

But they said the government asked for a delay in payment to ease financial pressure on the Treasury, citing a collapse in cocoa revenues.

Sean Lyngaas, a journalist based in Abidjan, told Al Jazeera that the decision of the mutinuous soldiers’ spokesman “did not sit well with many” and that he “wasn’t really representing the totality of the group”.

He added: “This is very similar to what happened in January. We had this ripple effect and soldiers are very keen to demonstrate their power to bring the government to the negotiating table.”

The AFP news agency identified the spokesman as Sergeant Fofana.

“We apologise for the various situations we know we have caused. We definitively renounce all our financial demands,” Fofana said on Thursday, and saluted the president in a sign of allegiance.

Ouattara said he believed the rebellious troops would now be “exemplary soldiers”.

The Ivory Coast was going through a “very, very difficult time”, the president said, after a fall in the price of cocoa led to a net loss of 150bn francs to the state budget.

Al Jazeera’s Ahmed Idris, reporting from Maidugiri, in Nigeria, said the revolt had caused banks and shops to close in Abidjan on Friday.

“While less intense than the first one [mutiny]… nobody is willing to bet that this will not escalate,” he said.

“Already, people, civil servants, businessmen have closed shops fearing that this can escalate and most parts of Abidjan, we were told a few hours ago, were empty because people were afraid things can get out of hand.”

Lyngaas told Al Jazeera that the unrest was testing the “credibility of the government … and the ability of the soldiers to fall in line behind a leader is still elusive”.

He added: “There isn’t a lot of coherence to the way this mutiny seems to be unfolding.”

Gbago was forcibly removed from office in 2011 after he refused to accept Ouattara’s internationally recognised victory in a presidential election the year before. The rebels were then integrated into the army in a peace deal.

Last year, Ivory Coast launched an ambitious plan for the modernisation of the military, including an overhaul of personnel as well as purchases of material worth 1.2 billion euro ($1.3bn).

Part of the plan provides for the departure of several thousand men, particularly ex-rebels, who will not be replaced. 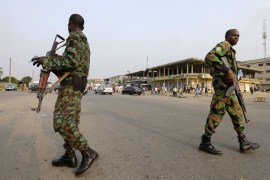 Gunfire erupts near main military camp in city of Bouake, where disgruntled soldiers launched a mutiny on Friday. 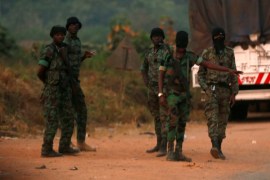