Police in Indonesia say they have killed six suspected members of an armed group after a failed drive-by shooting targeting officers in East Java.

Frans Barung Mangera, East Java Police spokesperson, said that after a police chase on Saturday, the six abandoned their vehicle in a village in the Tuban area, not far from the industrial city of Surabaya, and attempted to flee into a plantation where they were all killed in a second gun battle with police.

“We tried to stop that vehicle, but the vehicle did not stop,” Mangera said.

“By around 5pm we had immobilised all of them,” he added, confirming that all six had died during the incident.

Those in the vehicle “took out weapons and shot at officers”. A box of 9mm bullets was found in their vehicle, he said.

Police were monitoring the vehicle before the attack, Mangera said, in connection with Friday’s arrest of three suspected members of the group Jemaah Anshorut Daulah (JAD), who were allegedly planning an attack on a police station and had bought M16 machine guns from the southern Philippines.

Among those arrested on Friday was Zainal Anshori, a senior figure of JAD, an umbrella group of Indonesian fighters that claims allegiance to the Islamic State of Iraq and the Levant (ISIL) group.

JAD, which is on a US state department “terrorist” list, is estimated to have drawn hundreds of ISIL sympathisers in Indonesia, which has the world’s largest Muslim population.

Giving his version of the incident, Rikwanto, Indonesia’s national police spokesperson, said: “When the local police swept through the area, a gunshot was heard. A gunfight took place after and six of the men died.”

Police arrested one member of the group alive.

Rikwanto accused Anshori of orchestrating the planned attack on the police.

“They had acted on Anshori’s order as a revenge of his arrest,” he said, citing police interrogation of other arrested fighters.

Police said they seized dozens of rounds of ammunition, several firearms, knives, books and a car used by the men.

Indonesia has suffered a series of attacks in the past 15 years, including the 2002 Bali bombings that killed 202 people, mostly foreign tourists.

It has had some major successes tackling violence inspired by al-Qaeda’s attacks on the US in 2001.

However, it has been on high alert over a recent resurgence in activism inspired by ISIL, also known as ISIS.

The most serious incident last year was in January when four suicide bombers and fighters attacked a shopping area in central Jakarta. 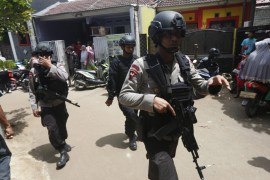 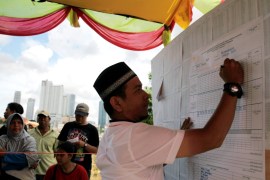 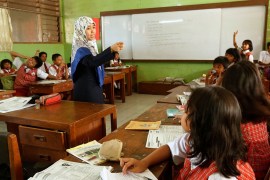