Somalia’s new military boss has survived a suspected suicide car bomb attack that has killed at least 15 people, according to police.

General Mohamed Ahmed Jimale, who was recently named new chief of defence forces, was travelling with senior military officials on Sunday when the bomb exploded near Somalia’s defence ministry compound in the capital, Mogadishu.

The death toll could rise as a minibus carrying passengers was also destroyed in the blast.

“When we arrived at the scene, we counted bodies of 15 people. Most of them were severed,” Mire Aden, a local police chief, told Al Jazeera.

“A number of soldiers are among the dead,” he said, adding that Jimale had survived the blast. None of the civilians had survived, Aden said.

Armed group al-Shabab, which has carried out frequent attacks aimed at overthrowing the country’s internationally recognised government, has claimed responsibility for the blast.

READ MORE: At least 19 people killed by landmine in Somalia

A huge cloud of smoke billowed over the scene and heavy gunfire was heard in the area.

The wreckage of the civilian minibus was in the street, with a pool of blood under the vehicle. Burning debris littered the area.

Soldiers opened fire in the air to disperse a crowd standing near a car of an electricity company that was destroyed by the powerful blast.

“There is flesh and blood everywhere,” he said looking at the destruction caused by the blast.

The latest attack comes days after Somalia’s President Mohamed Abdullahi Mohamed declared a new war against al-Shabab amid a worsening security situation as the group steps up deadly bombings in the capital and elsewhere.

At least 19 passengers of a minibus were killed in a landmine explosion on Thursday, hours after Mohamed instructed the army to prepare for a new offensive against al-Shabab.

The group has denounced Mohamed, who was elected as president in February, as an “apostate” and warned Somalis against supporting him.

Al-Shabab has been pushed out of the capital and other major urban areas in Somalia by national and African Union multinational forces, but it continues to carry out deadly bombings. Targets have included hotels, military checkpoints and the presidential palace. 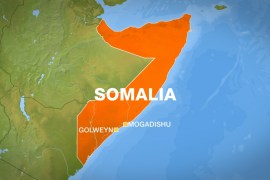 At least 19 people killed by land mine in Somalia 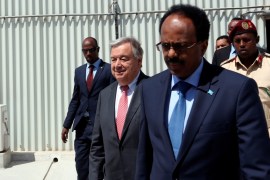 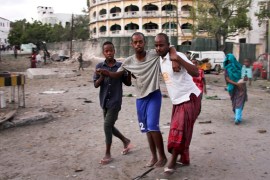