Members of the US Congress from both parties have backed President Donald Trump’s cruise missile strikes on Syria, but demanded he develop a strategy for dealing with the broader conflict and consult with Congress on any further action.

In the biggest foreign policy decision of his presidency, Trump ordered the firing of cruise missiles at a Syrian air base that US officials said was the launching point for a deadly chemical weapons attack against Syrian civilians this week.

“The strike was well planned, well executed. It was certainly more than a pinprick, and sends a message … that using chemical weapons again is not something [Syrian president Bashar al-Assad] can do with impunity,” Republican Senate Majority Leader Mitch McConnell told a news conference.

McConnell said Vice President Mike Pence had called him to explain the rationale for the strikes. It was one of a series of calls by administration officials to members of Congress beginning shortly before the strikes and extending until after midnight on Thursday evening.

“I am hopeful these strikes will convince the Assad regime that such actions should never be repeated,” Democratic Senator Mark Warner, vice chairman of the Senate Intelligence Committee, said.

But many said the president must present a plan to Congress outlining his Syria strategy for the future, including how his plan of safe zones inside Syria will help victims of the conflict.

Republican Senator John Cornyn told reporters that the administration has not defined its main target in Syria – whether it is Assad’s government or the Islamic State in of Iraq and the Levant (ISIL) group.

Most lawmakers insisted Trump should seek Congress’ approval for any additional military action.

“Congress must live up to its constitutional responsibility to debate an Authorisation of the Use of Military Force against a sovereign nation,” Democratic Leader Nancy Pelosi wrote in a letter asking Speaker Paul Ryan to call the House of Representatives back to Washington to debate a formal authorisation to use military force.

The House is not due to return until late April.

Under the US constitution, declarations of war require congressional approval.

“We’ve had no chance to weigh or weigh in on whether we should do it or not,” Paul told reporters.

“There clearly wasn’t enough consultation and the constitution is very clear about this, you can’t go to war without a vote of Congress,” he said.

Democratic Senator Chris Murphy, another foreign relations committee member, said that if Congress does not assert itself now, it risked losing its constitutional right to declare war.

“I think it’s devastating to the future role of Congress in foreign affairs. If we don’t authorise this action, I don’t see why any president would ever come to Congress,” Murphy said.

Partisan debate over how to deal with Syria has been bitter. In 2013, then-president Barack Obama ran into stiff resistance from many Republicans, including McConnell, when he proposed military action to retaliate for a chemical attack that crossed Obama’s red line.

Many Democrats, some of whom had paid a political penalty for backing Republican President George W. Bush’s war in Iraq, also opposed intervention.

Obama’s abrupt decision not to fire missiles and instead work with Russia to remove Assad’s chemical weapons infuriated many Republicans who had backed the Democratic president’s proposal.

The conflict in Syria has now dragged on for six years, devastating the country, destabilising the region and leaving millions homeless. 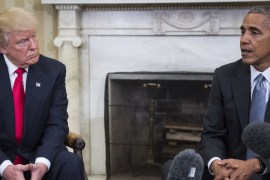 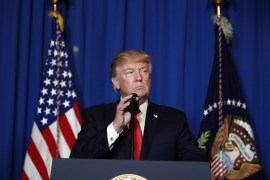 3 questions to Marwan Bishara after US strike in Syria

Al Jazeera’s senior political analyst comments on the lead-up and aftermath of US missile strikes on a Syrian airbase.