Four people were killed when a hijacked beer truck ploughed into a crowd on a shopping street and crashed into a department store in central Stockholm on Friday.

The incident occurred just before 13:00 GMT at the corner of the Ahlens department store and Drottninggatan, the city’s biggest pedestrian street, above-ground from Stockholm’s central subway station.

“We stood inside a shoe store and heard something … and then people started to scream,” witness Jan Granroth told the Aftonbladet daily. “I looked out of the store and saw a big truck.”

Photos from the scene showed a beer truck sticking out of the department store, and Aftonbladet reported that Swedish beer maker Spendrups said one of its vehicles had been carjacked earlier on Friday.

Lars Bystrom, a police spokesman, confirmed to Swedish media that four people were killed and 12 others injured.

One man has been arrested for “some kind of involvement” in the attack, Bystrom said.

The vehicle reportedly caught fire after driving through the busy pedestrian zone and slamming into the building.

Police vans circulating in the city using loudspeakers urged people to go straight home and avoid large crowds. Helicopters could be heard hovering in the sky over central Stockholm.

An image of a suspect caught on a surveillance camera was later released by police. The picture showed a man wearing a white sweater and dark hoodie under a military green jacket, with dark stubble on his face.

“An attack on any of our member states is an attack on us all,” said EU chief executive Jean-Claude Juncker. “One of Europe’s most vibrant and colourful cities appears to have been struck by those wishing it – and our very way of life – harm.”

In London last month, a man in a car ploughed into pedestrians on Westminster Bridge, killing four, and then stabbed a policeman to death before being shot by police. 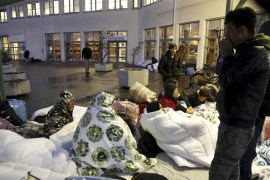 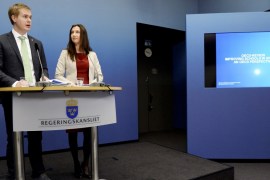 As the government considers new, harsher laws on refugees, we examine the impact of its existing integration policies.