Thousands of protesters gathered outside Paraguay’s Congress in a new but peaceful demonstration over an unpopular Senate vote for an amendment last week that would allow President Horacio Cartes to run for re-election.

In addition to calling for the amendment to be withdrawn, thousands gathered peacefully outside Congress on Monday night, holding candles in a vigil for the 25-year-old protester, Rodrigo Quintana, killed by police during the demonstrations on Friday.

Signs reading “S.O.S. Paraguay” hung from tents in the plaza, where people grilled meat and settled in for a long night of protest. Dozens of police officers stood behind fences separating the plaza from the entrance to the Congress building, while another group carrying riot gear stood by.

Supporters of Cartes, a former soft-drink and tobacco businessman, want him to be able to seek a second term in a country that has constitutionally forbidden re-election after a 35-year dictatorship fell in 1989.

On Friday, protesters had clashed violently with police, storming and setting fire to the Congress building after a group of senators called a special session behind closed doors, rather than on the Senate floor, to pass the measure.

The officer accused of killing Quintana inside the Liberal Party’s headquarters was charged with homicide on Monday and faces up to 30 years in prison, newspaper Ultima Hora reported.

The charged officer told local television he believed his gun was loaded with rubber bullets.

Late on Sunday, Cartes called on different political factions to meet and discuss ways to reduce tensions in the South American country of 6.8 million people after an appeal from Pope Francis, who hails from neighbouring Argentina.

The amendment would still have to be approved by the lower house, where it was expected to have strong support. But the head of the lower house and Cartes’ ally, Hugo Velazquez, told reporters on Monday the vote would be delayed until the dialogue Cartes requested took place. It is scheduled to begin on Wednesday.

The protests punctured a period of relative stability under Cartes in which the soy and beef exporting nation became one of South America’s fastest-growing economies and began moving past a long history of political uncertainty.

Senator Lilian Samaniego, a Cartes ally, said re-election supporters would not be deterred by the protests and opposition.

“The proposal will not be withdrawn,” she said after leaving a meeting in the presidential palace with governors, mayors and other politicians.

Opposition leader Efrain Alegre said he would participate in the dialogue called by Cartes only after an investigation into Quintana’s death was completed and Friday’s Senate vote was annulled.

“First we have to get things in order and then we can have a thousand meetings if that’s what it takes,” he said. 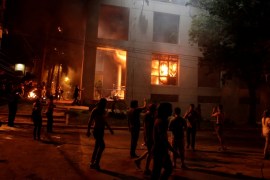 Demonstrations over secret Senate vote on bill that would allow President Cartes to run for re-election turn violent.