Ecuador’s conservative presidential candidate Guillermo Lasso has said he will not accept the result of the runoff election won by his socialist rival Lenin Moreno.

Hundreds of supporters heeded his call for protests on Monday evening, gathering near the closely guarded electoral council offices in Quito to rally against what they call a fraudulent process.

“I cannot accept these results because they do not reflect the will of the people,” Lasso, a former banker, said. “There is fraud, blatant fraud, in the counting process.”

With more than 99 percent of polling places counted after Sunday’s second-round runoff, Moreno had 51 percent of the vote while Lasso stood at just under 49 percent.

Even as leaders from right-wing governments in Latin America began calling Moreno on Monday to offer their congratulations, Lasso vowed to keep up the fight against the installation of an “illegitimate” government.

“We’re on the correct side of history. We won’t cross our arms and stand by,” he said on Twitter. “We will exhaust all political and legal channels in Ecuador and abroad to respect the will of the people who called for a change.”

Key to Lasso’s challenge of the results in all of Ecuador’s 24 provinces were the results of three exit polls that showed him winning. One by pollster Cedatos, which accurately predicted the results of the first round, gave him a victory by six percentage points.

Part of the problem is the opposition’s distrust of the National Electoral Council, which it says has become an appendage of the executive in the way the electoral board in Venezuela has all but lost independence under socialist President Nicolas Maduro, a key ally of Ecuador’s current president, Rafael Correa.

On election night, thousands of outraged Lasso supporters shouting “fraud” crashed through metal barricades to almost reach the entrance of the electoral council’s headquarters in Quito.

Scuffles also broke out in Guayaquil, where Lasso is from, before riot police pushed back protesters with tear gas.

But so far he has failed to present any evidence of vote tampering except for a single voting act of 248 ballots from a rural area whose tally he says was reversed in favour of Moreno when sent to the National Electoral Council’s headquarters.

The Organization of American States said its 400 observers did not see a single incident of fraud and very few irregularities, and as far as they were concerned the process was transparent and clean.

Several regional leaders offered their congratulations and a local electoral watchdog that carried out a quick count of its own said on Monday that Moreno had a 1.6 point edge in their sample, which is considered highly accurate.

Correa accused Lasso supporters of trying to deny the results and provoke violence.

“By force they want to achieve what they can’t at the ballot box,” he said on Twitter.

On Monday, he appeared alongside Moreno at the changing of the guard ceremony at the presidential palace.

“I’m going to be the president of everyone, but fundamentally those who are poorest,” said Moreno.

For weeks Ecuadoreans polarised by 10 years of Correa’s iron-fisted rule had been bracing for a contested vote.

With Ecuador’s economy slated to shrink by 2.7 percent this year as oil prices remain low, analysts had been anticipating that Lasso would rally support from the 60 percent of voters who backed anti-Correa candidates in the first round and join the growing list of Latin American nations – Argentina, Brazil, Peru and Venezuela – shifting to the right in recent elections.

The majority of voters also said they were hungry for change amid ongoing corruption allegations related to bribes that Brazilian construction giant Odebrecht paid to officials in Correa’s government and a $12m contracting scandal at state-run PetroEcuador.

Yet in the final weeks of the race, Moreno inched ahead in polls amid an aggressive campaign led by Correa to cast Lasso as a wealthy, out-of-touch politician who profited from the country’s 1999 banking crisis.

Moreno, 64, also benefited from last-minute doubts that the pro-business Lasso, if elected, would gut social programmes that have endeared poor voters to Correa’s “Citizens’ Revolution”. 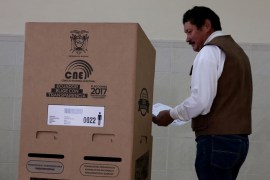