A group of students in the UK have launched a hunger strike in solidarity with Palestinian prisoners in Israeli jails.

Activists at the University of Manchester said the strike, which began on Thursday, would last for at least one week.

Talking to Al Jazeera on Saturday, Mohammed Ezzeldin, one of the five UK students on hunger strike, explained his reasons for participating.

“Political prisoners in Palestine are being held for up to six months without charge or fair trial,” he said.

“They are facing abhorrent conditions in jail, with no access to medical treatment or visitation rights.”

While the main target of the protest is the Israeli government, it comes amid deteriorating relations between pro-Palestinian activists and the University of Manchester.

Ezzeldin said he hoped the hunger strike would also pressure the university into dropping disciplinary action against two students involved in an anti-Israel protest in March.

“While we’ve gone on hunger strike purely in solidarity with the Palestinian political prisoners, we hope it increases pressure on the university to comply with our demands.

“Those are to drop all charges from the disciplinary hearing of the two BDS [Boycott, Divestment, and Sanctions] campaign activists.”

The pair are accused by the university of trespassing and damage to property after unfurling a banner expressing support for the BDS movement.

Palestinian activists accuse the university of censoring criticism of Israel and are demanding that it drop the case.

On the hunger strikers and their demands, a university spokesman said: “We became aware of this situation through social media, but not any direct contact with this group in relation to this particular protest.

“We are aware of their [the activists’] demands, and will respond in line with our obligations.”

Previous allegations of censorship levelled against the university include the charge that it vetoed speakers due to speak at events organised by BDS activists, and cancelled events.

The university rejects the accusation of censorship and said the events were cancelled because it was informed of them at short notice.

Another demand centres on the university’s ties to engineering firm Caterpillar, which makes bulldozers used by the Israelis to destroy homes of Palestinians in the occupied West Bank and East Jerusalem.

Students at the university have the backing of dozens of academics in Manchester, including the president of the local chapter of the university and college union, Adel Nasser.

Speaking to Al Jazeera, he praised the actions of the students as “courageous” and criticised the university for using “intimidation” tactics against the students being disciplined for the March protest.

“I think they [students] are doing it with the best intentions, but their success will depend on how much they can shame the university into dropping their stance,” Nasser said.

The university is not alone in having a tense relationship with pro-Palestinian activists.

The University of Central Lancashire, the School of African and Oriental Studies (SOAS), De Montfort University, and others are also accused of censoring critics of Israel.

On Thursday, hundreds of students at SOAS protested against a visit by the Israeli ambassador to the UK, Mark Regev. 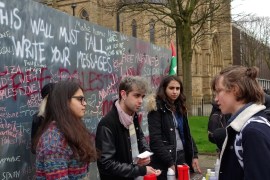 Pro-Palestinian activists have had events cancelled and faced other restrictions during Israeli Apartheid Week. 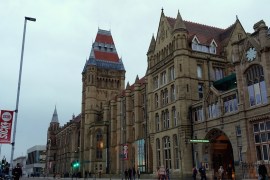