A grim search operation for the missing has resumed in Colombia after surging rivers sent an avalanche of floodwaters, mud and debris through the southwestern city of Mocoa, killing more than 200 people.

Residents on Sunday pried through piles of rocks and wooden planks that entombed houses, while search and rescue teams combed the rubble for signs of life.

Streets were covered in thick sand, mud and tree limbs from the rivers and rainforest that surround Mocoa, the capital of Putumayo, near Colombia’s border with Ecuador.

There was little drinking water and no power, which forced authorities to suspend the search-and-rescue effort during the night.

Officials said at least 207 people were killed in Saturday’s landslides, which were triggered by heavy rains.

Yet, the death toll is changing regularly as rescue teams find more bodies.

Authorities say another 200 people, including many children, were injured and just as many remain unaccounted for amid the destruction.

“Rescue teams working here are telling us that 36 hours after these mudslides hit the town, nobody really hopes to find anybody alive,” Al Jazeera’s Alessandro Rampietti, reporting from Mocoa, said.

“They will continue, of course, searching for the missing bodies,” he added.

“In the meantime, a lot of the attention is going to the survivors; those who are alive but lost their homes. They are in need of clean water and food – just basic necessities.”

‘Many more under the mud’

Throughout the city, people dug through the ruins, salvaging what they could of their possessions and looking for the missing.

Dozens of people were in the door of a hospital looking for family members who were not on the list of those confirmed injured or dead.

Others frantically knocked on the doors of neighbours, hoping to find someone with information about their relatives.

“People went to their houses and found nothing but the floor,” Gilma Diaz, a 42-year-old woman from another town who came in search of a cousin, told the Associated Press news agency.

Heavy overnight rainfall caused several rivers to overflow their banks, sending mud and debris crashing onto houses as people slept, and sweeping away vehicles and trees.

Many of the victims did not have enough time to climb on top of their roofs, or seek refuge on higher ground.

“We’ve declared an emergency in the area so we can help people as best we can,” said Colombia’s President Juan Manuel Santos, who flew to Mocoa on Saturday to oversee rescue efforts.

He added that 30 percent of monthly rain fell in just one night.

“All of our hearts are with the victims of this tragedy.”

After his first visit on Saturday, Santos on Sunday returned to Mocoa with several ministers. The priority is to restore roads, electricity and the water supply, he said.

Herman Granados, an anesthesiologist, told AP that he worked throughout the night on victims. He said the hospital did not have a blood bank large enough to deal with the number of patients and was quickly running out of its supply.

Some of the hospital workers came to help, even though their own relatives remained missing.

“Under the mud,” Granados said, “I am sure there are many more.”

Colombia has been hit by several deadly landslides in recent months.

Last October, a landslide in the north of the country killed 10 people in October last year.

A month later, another landslide killed nine people in the southwestern rural town of El Tambo, officials said at the time. 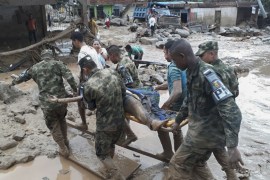