The landslide swept over the village of Ayu at 6:40am local time (00:40 GMT) on Saturday and buried six houses with inhabitants inside.

“All 24 citizens of Kyrgzystan, nine of them children, died under the landslide in the south of the country,” Elmira Sheripova, a spokeswoman for the emergencies ministry, told AFP news agency.

A second ministry official also confirmed the death toll to Al Jazeera in a phone call.

District official Alisher Bakyshev told local media residents had been ordered to leave by the emergencies ministry in March because of the risk of landslides, and 34 families evacuated their homes but some later returned.

In an emotional address published on the presidential YouTube channel, Atambayev called on villagers to heed government warnings to leave their homes during extreme weather.

“I appeal to my compatriots. A person’s life, especially the life of a child, is much more precious than any property, any livestock. You cannot put any sort of property above life,” he said.

More than 266 rescue workers including medics and soldiers were working to excavate the buried village, the emergencies ministry said, adding that some 40 families living close to the disaster zone are being evacuated and housed in tents.

Since the beginning of the year, at least 25 landslides have been registered in the Osh region of the Central Asian country, killing six people, Russia’s state-run news agency RIA reported.

Ninety-five percent of Kyrgyzstan’s territory is mountainous. A landslide in the country’s south in 2004 killed 33 people.

Saturday’s landslide is the second major tragedy to strike the ex-Soviet country of six million people since the beginning of the year.

In January a Turkish cargo plane crashed into a village close to the country’s main airport, killing 39 people. 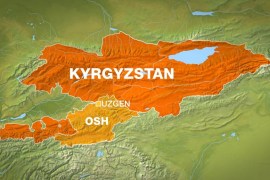 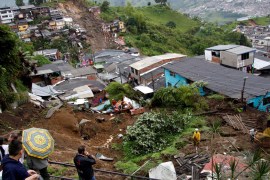 At least 14 killed in Manizales landslide

Mud and debris spill through streets of city in west Colombia that received equivalent of one month of rain overnight. 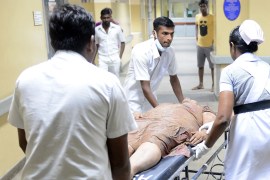