Southeast Asian leaders are meeting in the Philippines for a day-long meeting where tensions on the Korean Peninsula and in the South China Sea are expected to be high on the agenda.

The 10-nation Association of Southeast Asian Nations (ASEAN) was expected on Saturday to urge North Korea to “immediately cease all actions that violate its international obligations and contravene United Nations Security Council resolutions”, according to a draft of the chairman’s statement to be issued at the end of the meeting.

Tensions have surged in the region in recent weeks in the wake of a series of North Korean missile tests and rhetoric from US President Donald Trump‘s administration on the country’s weapons programme.

The United States has deployed a naval strike group to the Korean Peninsula amid signs the North could be preparing for a sixth nuclear test, and US officials have said all options are on the table.

“The actions of [North Korea] have resulted in an escalation of tensions that can affect peace and stability in the entire region,” the ASEAN statement said.

Al Jazeera’s Jamela Alindogan, reporting from the Philippine capital Manila, said “unless the situation with North Korea develops”, there will not be further communiques from ASEAN leaders as many of the leaders were “saddled with their own problems.”

“ASEAN is known mainly for its timidity. It has always described itself as a platform for stability, and this is especially the case this time around when world powers are jostling for power.”

Another topic expected to be discussed at the summit is China’s role in the region.

In the chairman’s statement, the leaders also called on countries with claims to the South China Sea to avoid actions “such as land reclamation and militarisation that may further complicate the situation”.

OPINION: Can China afford to challenge the United States?

China has nearly completed construction on three man-made islands to the consternation of other Asian claimant governments and the US.

The artificial islands have been built with runways, towers, radars and, more recently, weapons systems.

The US has previously criticised what it called China’s militarisation of its maritime outposts, and stressed the need for freedom of navigation by conducting periodic air and naval patrols near them.

“We took note of the serious concerns expressed by some leaders over the recent developments and escalation of activities in the area, which may further raise tensions and erode trust and confidence in the region,” the chairman’s statement said.

In the run-up to the conference, Philippine President Rodrigo Duterte said the Philippines and other nations were helpless to stop Chinese artificial island-building in areas they claimed, so there was no point in discussing it at the summit.

“Duterte’s position as chairman this year is also a major test since he’s known as being impatient and petulant with the rituals of diplomacy,” Al Jazeera’s Alindogan said.

“It remains to be seen what he will say at the chairman’s statement, but we are not expecting world leaders to be speaking against his war on drugs, the complaint against him at the International Criminal Court, especially because of the timidity of ASEAN from within.”

Duterte’s drug war, which has claimed thousands of lives and led to warnings by rights groups about a possible crime against humanity, has been widely condemned in the West.

But he has enjoyed support from some of his Southeast Asian guests this week, including Brunei Sultan Hassanal Bolkiah and Indonesian President Joko Widodo. 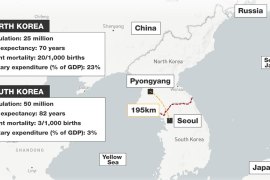 Two Koreas: History at a glance

A brief history of how North and South Korea got to where they are today.