Air strikes have killed at least 11 people, seven of them children, as they tried to flee the fighting in Syria’s northern Raqqa province, witnesses and a monitor said.

A family was killed in a suspected US-led coalition air strike that targeted their car while leaving the city of Tabqa, the UK-based Syrian Observatory for Human Rights reported on Tuesday.

The Syrian Democratic Forces (SDF) and the Islamic State of Iraq and the Levant (ISIL, also known as ISIS) have been locked in battle in the northern city and thousands have fled the area.

A citizen journalist group in Raqqa known as Raqqa is Being Slaughtered Silently (RBSS) said at least 17 civilians were killed in the strikes on the city.

The US-backed SDF are trying to retake Raqqa province, ISIL’s stronghold in Syria and are currently battling ISIL around Tabqa after they have captured the south of the city.

Raqqa province was taken by ISIL in January 2014 from the former al-Qaeda affiliate in Syria, and ISIL seized Tabqa’s airbase from the Syrian government in August 2014.

The SDF captured the strategic Tabqa airbase from ISIL last month. The airbase is 45km west of Raqqa.

SDF was founded in Syria’s mainly Kurdish northeastern region in October 2015 and is made up of at least 15 armed factions, mostly fighters from the Kurdish People’s Protection Units and the Free Syrian Army.

The Observatory said in a report on Tuesday that at least 1,264 civilians, including 280 children, have been killed in US-led coalition air strikes since September 2014.

On April 14, the US Central Command said it mistakenly killed at least 18 members of the SDF in Tabqa.

Elsewhere in Syria, government air strikes have hit the town of Houla in Homs province, and killed at least six civilians, the Observatory reported.

In its latest report, the Observatory said at least 10,915 civilians, including 2,393 children, were killed in government air strikes and barrel bombs dropped by helicopters.

In addition to that, 64,000 others were injured in these attacks.

The casualties were a result of 30 months of air strikes and helicopter strikes.

The UN said in a press release on Monday that at least 39,000 newly displaced people fled to the Jib Al-Shaair makeshift camp in Raqqa province, where four out of five people are staying in the open air without appropriate shelter.

“The UN is deeply concerned for the safety and protection of over 400,000 people in Raqqa, in Syria. In past weeks, civilians have been exposed to daily fighting and air strikes which resulted in an escalating number of civilian deaths and injuries as well as damage to civilian infrastructure, including hospitals, schools, markets and water infrastructure,” the press release said.

As the Syrian conflict enters its seventh year, more than 465,000 people have been killed in the fighting, more than one million injured and over 12 million Syrians – half the country’s prewar population – have been displaced from their homes. 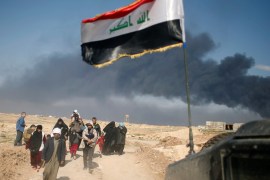 From Mosul to Raqqa: ‘Our family is still suffering’

An Iraqi man shares his story of fleeing ISIL in Iraq and then in Syria, only to be stopped at the Turkish border. 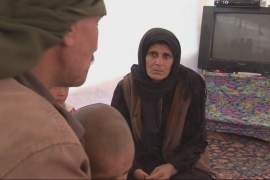 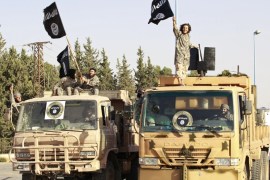