A major earthquake of magnitude 7.1 has struck off the west coast of Chile, rocking the capital Santiago and briefly causing alarm along the Pacific Coast but not producing any serious damage.

The quake on Monday was centred 35km west of the coastal city of Valparaiso at a shallow depth of 10km below the sea, and about 137km from Santiago, the US Geological Survey said.

“It was short but very powerful,” said Paloma Salamo, a 26-year-old nurse, who was in a clinic just north of Valparaiso when the quake struck.

People ran out of the facility carrying children and some headed for the hills when the tsunami alarm sounded, she told Reuters news agency, but calm was soon restored.

Officials cancelled a tsunami warning that had been issued in Valparaiso after the Chilean Navy and the Pacific Tsunami Warning Center said the quake was not expected to produce a dangerous seismic sea wave. The centre reported small tsunami waves of 15cm.

There were no reports of structural damage in Valparaiso, but mobile phone networks were down in some places, a spokesman with the local government in Valparaiso said.

“We have no reports of victims or significant damage. There have been some landslides in some places, without major complications,” said Interior Minister Mario Fernandez.

“In general the situation is pretty normal bearing in mind the quake’s intensity.”

Chile lies on what is known as the “Ring of Fire” – an arc of fault lines that circles the Pacific Basin and is prone to frequent earthquakes and volcanic eruptions.

The north of the country was struck by an 8.3 temblor followed by a tsunami in September 2015, killing 15 people.

In 2010 another quake measuring 8.8, also followed by a tsunami, struck the centre and south of the country, killing more than 500 people. 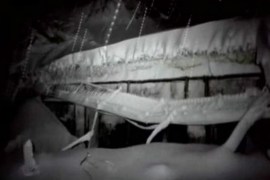 Bodies were found inside the hotel in the central Abruzzo region, media reports say. 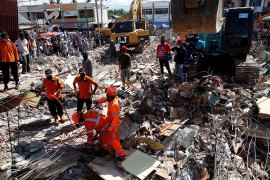