Paris, France – In less than a day, French citizens will begin the process of selecting their new president, in an election that could determine the future of the European Union and bring to power Marine Le Pen, the leader of the far-right National Front (FN).

If the results of the opinion polls reflect the ballots cast on Sunday, Le Pen would advance to the second round against Macron, where she is expected to be defeated by a decisive margin.

But polls have been wrong before and there is no guarantee either Macron or Le Pen will make the run-off vote on May 7.

Neither Fillon of The Republicans or Benoit Hamon of the Socialist Party was expected to win in their respective primaries, according to the polls.

On their campaign platforms, candidates are promising radically different policies on a vast number of issues.

Fillon is running on a manifesto of fiscal conservatism, pledging to drastically cut public spending, but his campaign has been dogged by corruption charges.

Macron has positioned himself as the centrist candidate, while Hamon, also a leftist, has promised to introduce a basic income for all nationals.

Add to the mix several minor candidates, who include the car mechanic turned left-wing leader Philippe Poutou, and more traditional conservatives such as Nicolas Dupont-Aignan.

They have little chance of winning, but can sap away support from the frontrunners in the first round.

Candidates will not only be battling each other for the presidency, but against voter apathy, with Ipsos putting the number of people who will abstain or cast blank ballots at 27 percent.

Al Jazeera took to the streets of the French capital, Paris, to find out who, if anyone, appealed most.

Osnate, who lives in the suburb of Sevran, told Al Jazeera “she had no clue” who she would vote for, but would probably end up voting for one of the smaller right-wing candidates.

“My daughter, who is more interested in politics than I am, is supporting Nicolas Dupont-Aignan.

“We would rather support a small candidate than vote for the same people who don’t bring us anything, who’ve been in power for over 30 years and who haven’t achieved much.”

Dounia, who also lives in Sevran, said she would cast a blank ballot in the first round.

“Each time we vote for someone, after the election they turn their back on their policies, so I’d rather vote blank,” she said.

When asked if she would still abstain if Le Pen made the run-off, she responded: “No, I would vote for the other candidate.”

“I have no preference, I won’t vote, I will cast a blank ballot instead,” she told Al Jazeera, explaining her decision:

“Politicians say different things during the campaign, but when they are elected they do the same thing.”

Both Jagan and Steban will vote for Melenchon because of his “proximity to the youth”.

Jagan told Al Jazeera: “Melenchon’s programme is workable. He wants economic change, but is also aware of social issues and the environment.”

Steban said Melenchon is “different from the other candidates”, and that the others would do things as they had always been done.

Patrice said he backs Fillon in the first round for his economic policies despite being disappointed by corruption charges he faces.

If Fillon is knocked out in the first round, he said he would switch to supporting Macron.

“The country is close to bankrupt and very important reforms need to be implemented,” he said.

“Fillon will reform the economy more drastically, while Macron will be slower to implement the changes that are needed.”

Pauline said she would vote for frontrunner Macron because he is the “rational choice” and that he is “new”.

Luce is a supporter of Melenchon, while Julien is undecided between Macron and Melenchon.

Explaining her choice, Luce told Al Jazeera: “Melenchon is different from the others. Macron is in the centre, so he isn’t very different.

“[Melenchon] is more human and appears closer to ordinary people. He also cares about ecological issues and makes an effort to connect with the youth with his YouTube videos.”

Julien said “Macron was young and represented the youth” and appealed to him because he was “neither left or right”. 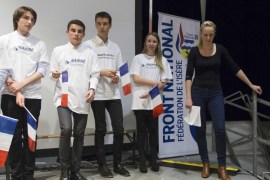 Why does Le Pen get so much support from young voters? 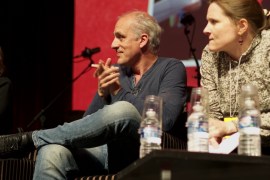 Philippe Poutou builds a fan base

The outsider presidential candidate wins supporters because of his working-class background and leftist platform.