An attacker has killed a police officer and seriously wounded two others before being shot dead in an attack on the Champs Elysees shopping district in the French capital, according to Paris police and the interior ministry.

The Islamic State of Iraq and the Levant (ISIL) group claimed responsibility for the attack on Thursday evening, which took place three days before France’s first round of presidential election. It was not possible for Al Jazeera to independently confirm the claim.

Pierre-Henry Brandet, interior ministry spokesman, said the attack happened near the Franklin Roosevelt Metro station, at the centre of the avenue popular with tourists.

“An automatic weapon was used against police, a weapon of war,” Brandet told reporters, adding that the “terrorist threat” in the country remained high.

“A vehicle stopped near a [parked] traffic police vehicle. A man got out straight away and opened fire on the police, fatally injuring one police officer,” Brandet said.

“The man then tried to run away along the pavement and aimed at the police. He injured two of them, apparently seriously, and one policeman shot back and killed the attacker.”

French television networks reported that the chief suspect was a 39-year-old French national known for previous violent crimes. Raids took place at his address in a suburb to the east of Paris.

“The identity of the attacker is known and has been checked. I will not give it because investigations with raids are ongoing,” Paris prosecutor Francois Molins told reporters.

According to a document obtained by Reuters, police have issued an arrest warrant for a second suspect. The warrant said the man had arrived in France by train from Belgium.

ISIL, also known as ISIS, said in a statement that the attacker was one of its fighters.

The prosecutors’ office said the counterterrorism office had opened an inquiry, while President Francois Hollande said he was “convinced” that a “terrorism” investigation is the correct approach.

The interior ministry confirmed on Twitter that explosives technicians were searching the vehicle used by the gunman.

Al Jazeera’s Shafik Mandhai, reporting from Champs Elysees, said dozens of police vehicles and at least one ambulance were seen in the area.

“The incident took place between Franklin Roosevelt metro station and the Arc de Triumph,” he said. “Police formed a cordon and began moving people away.”

Soldiers were patrolling the area and the cordon was extended to the streets surrounding Champs Elysees.

Massimo Cavazzini was walking along Champs Elysees when police arrived.

“We saw many cars converging to the middle of the road,” he told Al Jazeera.

“We immediately realised something was happening. Then two helicopters and around 50-60 cars were going there so we moved away to a safer place.”

On Tuesday, two men, suspected of preparing an attack to disrupt the first round of the election, were arrested in southern Marseilles with weapons and explosives.

OPINION: Elections in France – All about security

Several candidates in Sunday’s presidential election announced after the attack that they ended their campaigns early as a mark of respect.

Al Jazeera’s Natasha Butler, in Paris, said the attack throws the spotlight back on to security after an election campaign where it has been a major issue.

She said that around the country, even in small villages and towns unaffected by attacks, people still talk about the threat of violence.

“They’re frightened. There’s a sense that something like this could happen to anyone, at any given time,” she said.

“This is something we’ve seen repeatedly in France, that everyone who has popped up to carry out an attack, has been on the police database,” he told Al Jazeera. “Even the person that murdered the priest [in Normandy] last year was actually on bail for terror offences at the time.” 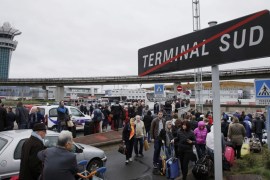