Iran’s former President Mahmoud Ahmadinejad has been disqualified from running in next month’s presidential election, according to state media.

The decision on Thursday was taken by the Guardian Council, a clerical body charged with vetting candidates for the May 19 election.

In a surprise move, Ahmadinejad registered as a candidate last week, despite previously saying he would not stand.

Iran’s Supreme Leader Ayatollah Ali Khamenei had previously urged him not to run.

In 2009, Ahmadinejad’s re-election was followed by one the largest protests to hit the country since the Islamic Revolution three decades before.

Ahmadinejad’s populist approach and humble roots mean that he remains a popular figure among poorer sections of society.

The Guardian Council said it had compiled a final list of candidates earlier on Thursday and that the interior ministry would announce their names by Sunday. 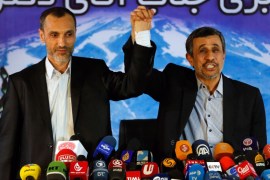 Iran’s Ahmadinejad: ‘Why are we fighting each other?’

In an interview with Al Jazeera, former Iranian president says he can improve the country and calls for regional unity. 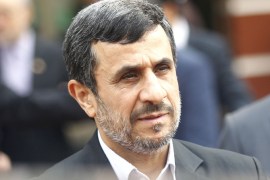 Former leader insists he will not run in the May 19 poll, saying his registration aims to support a political ally.