Jakarta’s Christian governor may escape jail for alleged blasphemy after prosecutors recommended probation, a day after he lost an election to remain governor.

The recommendation on Thursday of two years’ probation in the trial of Basuki Tjahaja Purnama, with a possible one-year jail term if he commits a crime during that period, was lighter than expected as he could have been sent to prison for several years.

Chief prosecutor Ali Mukartono said Purnama, known by his nickname “Ahok”, should be given a light sentence because he had contributed to “advancing the city of Jakarta” and had acted politely during his trial.

“If within the two years, Ahok doesn’t commit any new criminal act, like corruption, stealing … he will be free,” his lawyer I Wayan Sudirta told AFP news agency. “If within that two years he does commit a criminal act, he has to serve the one-year jail sentence.”

The sentence demand for allegedly insulting Islam came after he was defeated on Wednesday by Muslim challenger Anies Baswedan, a liberal who was accused of pandering to religious conservatives to win votes in the race for the Jakarta governorship.

After his victory, former government minister Baswedan celebrated with groups who helped organise mass protests in the capital against Purnama by praying at a major mosque.

A sentence recommendation is a normal step in an Indonesian court case, and is usually followed within weeks by a verdict.

The controversy began in September when Purnama, known for his outspoken style, outraged Muslims when he controversially quoted a passage from the Quran ahead of elections for the Jakarta governorship.

He insinuated that his opponents had used a Quranic verse to trick people into voting against him.

An edited version of his speech went viral online, sparking outrage far beyond Jakarta, where Purnama has ruled since his predecessor Joko Widodo became president in late 2014.

Before the blasphemy controversy erupted, Purnama enjoyed a large opinion poll lead due to his determination to clean up traffic-clogged, polluted Jakarta.

The trial started in December and dragged on for months, with both the prosecution and defence calling more than 40 witnesses.

Purnama’s team has accused the prosecution of calling biased witnesses, saying many were not present when the alleged blasphemy took place.

“This trial, in the first place, should never have existed,” Andreas Harsono, Indonesia researcher for Human Rights Watch, told Al Jazeera. “It is very political, it was used to corner Ahok. Indonesia should scrap the blasphemy law, in fact Indonesia should release all people who are in prison for this … law.”

The legislation was rarely used during the 32-year rule of strongman Suharto, but in recent years it has been exploited to persecute minorities, rights groups say. 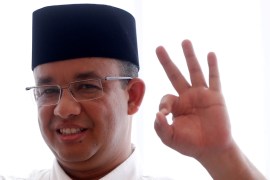 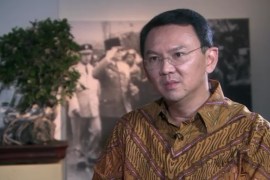