Lahore, Pakistan – The custodian of a shrine and two others have been arrested after murdering 20 devotees in Pakistan’s Punjab province, police said.

Abdul Waheed, custodian of the Ali Muhammad Gujjar shrine, drugged the devotees before beating them with sticks and stabbing them to death late on Saturday, local police officer Shaukat Manzoor told Al Jazeera.

He then handed himself over to authorities, the official added.

The incident occurred in the small village of Chak 95, just outside the city of Sarghoda about 160km west of Lahore.

“He drugged everyone who was at the shrine,” Manzoor said, adding that Waheed appeared to suffer from mental instability.

Initial reports indicated there were no survivors from the attack but local police officials later said at least two people are being treated at a local hospital.

“The wounded appear to be out of immediate danger,” Manzoor added.

Pervaiz Haider, a doctor at a Sargodha hospital, said most of the dead were hit in the back of the neck.

“There are bruises and wounds inflicted by a club and dagger on the bodies of victims,” he told Reuters news agency.

Chief of the local police station Shamsher Khan said Waheed was found sitting outside the shrine when authorities reached the location.

“He had a dagger dripping with blood on him,” said Khan. “He told us not to come near him otherwise he will attack us … But we managed to arrest him and the two other men who were sitting outside the shrine with him.

“The whole shrine was filled with bodies. There were 20 dead bodies, including three women and 17 men.”

Two other men, Zafar Ali and Sanaullah, believed to be Waheed’s accomplices, were arrested at the scene, Khan said.

Police said it was unclear if the men have any affiliation with armed extremist groups such as the Pakistan Taliban, who often carry out attacks targeting shrines and Pakistan’s minorities. 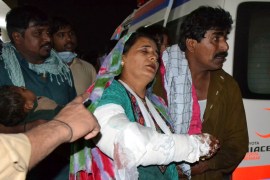 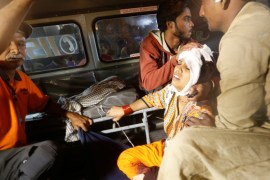 ISIL claims responsibility for blast at a shrine in Balochistan killing at least 52 and wounding more than 100 others. 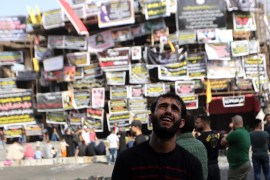 At least 30 killed in ISIL assault on Iraq shrine