The US Navy says an aircraft carrier intended as a show of force to North Korea will arrive in the Sea of Japan next week, after much confusion surrounding the path of the USS Carl Vinson.

The Navy on April 8 said it was directing a naval strike group headed by the Vinson to “sail north”, as a “prudent measure” to deter North Korea.

Pentagon chief Jim Mattis on April 11 said the Vinson was “on her way up” to the peninsula.

President Donald Trump the next day said: “We are sending an armada. Very powerful.”

But at the time of the announcements, the ships had temporarily headed in the opposite direction, to the Indian Ocean for military exercises with Australia.

The real movements came to light after the Navy released a photograph showing the Vinson off Java over the weekend.

White House officials said on Tuesday that they had been relying on guidance from the defence department.

A defence official told the AFP news agency on Tuesday that the ships were still off the northwest coast of Australia.

Lawrence Korb, a former US assistant secretary of defense and a retired Navy captain, said the conflicting messages were “very typical of how the Trump administration does business”.

“They send mixed signals all the time,” he told Al Jazeera. “They don’t have their whole team in place. There is a secretary of defense, but he has no deputies or assistants to work with him.

“You wonder who’s in charge, who was following up … Given the volatility of the situation, this is not a mistake you can afford to make.”

The announcement that the Vinson had been dispatched to the region increased tensions with Pyongyang, with its official Korean Central News Agency calling the carrier’s deployment “nothing but a reckless action of aggression to aggravate the tensions in the region”.

The US ratcheted up its rhetoric ahead of North Korea’s military parade and failed missile launch over the weekend, and Vice President Mike Pence on Monday declared that the era of US “strategic patience” in dealing with Pyongyang was over. 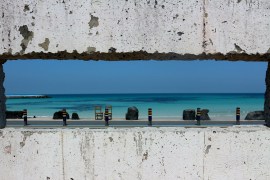 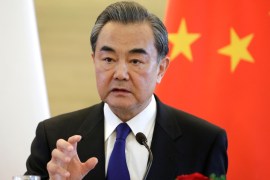