The evacuation and transfer of thousands of Syrians from four besieged areas resumed on Wednesday, according to the UK-based Syrian Observatory for Human Rights.

The reciprocal evacuations from the two pro-government villages of Foua and Kefraya and the two opposition-held towns of Zabadani and Madaya was disrupted by a bombing on Saturday that killed more than 120 people.

A large convoy of buses from Foua and Kefraya reached the edge of the rebel-held transit point of Rashidin outside the city of Aleppo.

“The process has resumed with 3,000 people leaving Foua and Kefraya at dawn and nearly 300 leaving Zabadani and two other rebel-held areas,” the head of the Syrian Observatory, Rami Abdel Rahman, told the AFP news agency.

Rashidin was the scene of Saturday’s deadly car bombing. At least 109 of the 126 dead were evacuees, among them 68 children. The rest were aid workers and rebels guarding the convoy.

Security was tightened up for Wednesday’s departures. Several dozen armed rebel fighters stood guard over the marshalling area where the buses were parked.

“There are 3,000 people, including fighters and their families, waiting in much the same way as they were on that fateful Saturday for the other buses from the other side to arrive,” Al Jazeera’s Andrew Simmons, reporting from Beirut, said.

“One could only imagine what it must be like.”

After last weekend’s bomb attack, dozens of parents who had come from the government-controlled areas said their children had gone missing as survivors were rushed to nearby hospitals in opposition-held areas.

“It’s really a desperate situation,” Simmons said, adding that many worried parents were posting appeals on Facebook for their children to be located and retrieved

“What must be worse than anything for anybody are that injured children who have been stuck on the opposition side after the bombing; not seeing their parents, not being with their parents,” Simmons said.

When Wednesday’s evacuations are complete, a total of 8,000 people should have left Foua and Kefraya, including pro-government fighters as well as civilians.

In exchange, 2,500 civilians and rebel fighters should have left rebel-held areas.

The deal to evacuate the towns was the latest in a string of such agreements, touted by the government of Syrian President Bashar al-Assad as the best way to end the fighting. Rebels say they have been forced out by siege and bombardment.

The population exchange has been criticised by rights groups, which say it rewards siege tactics and amounts to forced displacement.

The deal, currently in its first stage, has been repeatedly delayed.

A second phase is due to begin in two months’ time which should see the two government-held towns entirely emptied and all fighters, and civilians who choose to, leave the two rebel-held towns.

READ MORE: ‘Two years under siege, and it ends with displacement’

There was no immediate claim of responsibility for Saturday’s bombing.

The Syrian government blamed “terrorists” – a catch-all term for its opponents. Ahrar al-Sham, a key rebel group in Syria’s north, condemned the “cowardly” attack, saying that many of its members were killed in the blast. The group said it was willing to cooperate with an international probe to determine the culprits.

The United Nations says 4.72 million Syrians are in hard-to-reach areas, including 600,000 people under siege, mostly by the Syrian army, but also by rebels or the Islamic State of Iraq and the Levant (ISIL) group.

There has been a series of evacuations in recent months, mostly around the capital Damascus but also from the last rebel-held district of Syria’s third city Homs. 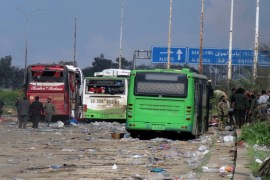 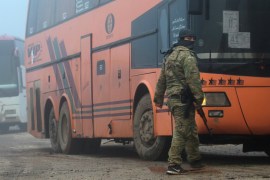 Complex transfer is part of a deal that will see more than 10,000 people evacuated and hundreds of prisoners exchanged.