At least 44 people are feared dead after a private bus swerved off a mountain road and plunged into a deep gorge in northern India‘s Himachal Pradesh state, according to a government official.

The rescue operation is ongoing and casualties could increase, according to Rohan Chand Thakur, deputy commissioner of Shimla district, where the accident occurred on Wednesday.

“Our officials, workers and medical teams have rushed to the spot for the rescue work. It’s not possible now to say the details,” Thakur said.

The cause of the accident is not yet known.

The Indian Express daily reported that the bus skidded off the road and fell nearly 250 metres downhill.

Among the casualties are 10 women and three children.

OPINION: Why Indian cars are not driven by safety concerns

Only two people, including the ticket checker, survived the crash, according to Thakur.

He said that rescue teams were working to recover the wreckage from the gorge.

Driver fatigue, negligence, poor-quality roads and vehicle maintenance are the usual causes of such accidents in India. 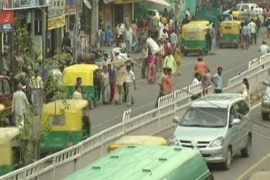