Turkey’s government has extended the country’s state of emergency for three more months.

Deputy Prime Minister Numan Kurtulmus on Monday said the National Security Council had recommended extending the state of emergency, set to expire on April 19, “to provide the continuance of measures aimed at securing the rights and freedoms of citizens.”

Parliament is to meet on Tuesday to vote on the recommendation.

It will be the third extension of the state of emergency in Turkey since it was initially imposed following a failed coup attempt by a group within the military in July 2016.

The decision enables the government to bypass parliament in enacting new decrees, but critics say the move could suspend rights and freedoms.

The move to extend the state of emergency follows the government’s narrow referendum win on Sunday to amend Turkey’s constitution and grant the country’s presidential office sweeping new executive powers.

The “Yes” campaign won with 51.4 percent of the vote with 100 percent of ballots counted, according to unofficial results.

Birol Akgun, a political scientist, told Al Jazeera that the ruling AK Party now faces expectations following the vote to fulfil its promises of stability and security, and to implement changes following a divisive campaign.

“The government should focus on structural changes that will complement this constitutional reform. These range from the disappearance of the prime minister post to the restructuring of the executive, legislative and judiciary branches. This needs to be done through a dialogue with the opposition parties and the civil society at large,” said Akgun.

Bringing back the death penalty will be at the centre of public debate in the coming days. President Erdogan says he will approve it if the parliament agrees to it.

Al Jazeera’s Sinem Koseoglu, reporting from Ankara, said that the ruling AK party is expected to invite President Recep Tayyip Erdogan to re-join its ranks in about two weeks time.

The invitation “could pave the way for Erdogan to once again lead the party he founded 16 years ago,” she said.

Turkey’s main opposition Republican People’s Party (CHP) demanded that the High Electoral Board (YSK) annul the referendum results, after the YSK decided on the day of the referendum to count “unsealed” paper ballots – those not given an official stamp.

“The problem is that there is a big shadow on the legitimacy of the results because in the very last minute the [YSK] changed the rules of the game while the game was on,” said Utku Cakirozer, an MP for the CHP, told Al Jazeera.

Anti-Erdogan protesters on Monday took to the streets of Istanbul – one of three major cities where Erdogan did not win a majority in Sunday’s referendum – and other cities, carrying “No” campaign signs.

The head of Turkey’s electoral board, however, defended the vote-counting process and said that the referendum’s results were valid.

Sadi Guven told media at the board’s headquarters in Ankara that the position on the paper ballots was a “unanimous decision made before voting results transferred to the system”.

“Before counting, ballots, envelopes, and number of voters are crosschecked,” Guven said on Monday.

He said unsealed vote envelopes were used in past elections. Guven added that final referendum results would be released within 12 days.

The Organization for Security and Cooperation in Europe said on Monday that a “lack of equal opportunities, one-sided media coverage and limitations on fundamental freedoms” had created an “unlevel playing field” in Turkey’s vote.

“In general, the referendum did not live up to Council of Europe standards. The legal framework was inadequate for the holding of a genuinely democratic process,” said Cezar Florin Preda, head of the delegation from the Parliamentary Assembly of the Council of Europe.

“The assessment that suggests that the referendum process fell short of international standards is unacceptable,” it said in a statement, blasting the monitors as “biased”. 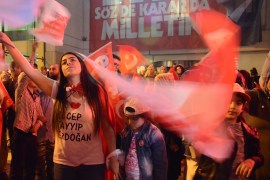 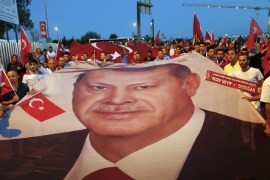 Turkey’s state of emergency deepens divisions among government supporters and critics in the wake of the failed coup.