Dozens of civilians have been killed in separate air raids across Syria over the past 24 hours, blamed by rescue workers and a monitor on Russian, US-led coalition and Syrian government fighter jets.

At least 10 people, including nine children, were killed on Tuesday in suspected Russian air raids on Maaret Harmeh village in Idlib province, an official with the Syrian Civil Defence, identifying himself only as Hamid, told Al Jazeera.

“An elderly woman and nine children [were killed] in suspected Russian air strikes that targeted Maaret Harmeh in Idlib this morning,” Hamid said, adding that 10 others were wounded in the attack.

Also known as White Helmets, the Syrian Civil Defence is a volunteer rescue group that operates mostly in rebel-held territory in Syria.

“Shortly after the first air strike, as the rescue team was searching for survivors, another air strike targeted the scene, damaging some of our equipment, including an ambulance and injuring some of our volunteers,” he said

“Three children were saved from under the rubble of their own home,” he said.

Maaret Harmeh is located just 22km away from the town of Khan Sheikhoun where a suspected chemical attack killed at least 87 people on April 4.

The Syrian Observatory for Human Rights also reported the deaths, adding that several other areas in Idlib were targeted by air raids on Monday evening.

The UK-based monitor, which is tracking developments in Syria’s war via a source of contacts on the ground, said those killed in Maaret Hermah in a suspected Russian air raid were all from the same family. It said the nine children killed were between the ages of two and 13.

The Observatory says it determines whose fighter jets conduct air raids according to type, location, flight patterns and munitions used.

Elsewhere in Syria, suspected government air raids targeted Urum al-Kubra, a village in the northwest of Aleppo province, killing at least four people from the same family, according to the Observatory.

In Deir Az Zor, a suspected US-led coalition air raid on Monday targeted the town of Al Bukamal on the Iraqi border and killed at least 15 people, including five children, the monitor said on Tuesday.

Earlier on Monday, a US-led coalition air raid targeted Al Husseiniyeh in the western suburbs of Deir Az Zor and killed at least seven people, including one child. 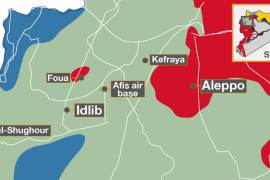 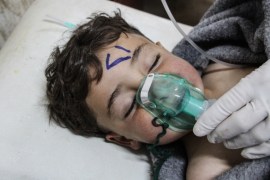 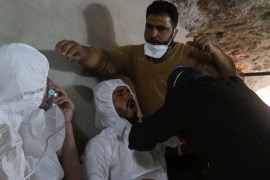