US President Donald Trump’s national security adviser has met Afghan officials in Kabul, just days after the US dropped the “mother of all bombs” on suspected ISIL fighters in the country’s east.

General HR McMaster, the first high-level US official to visit the country since Trump took office, held meetings on Sunday with President Ashraf Ghani; Hanif Atmar, national security adviser; and other high-level Afghan officials to discuss “joint efforts to counter terrorist groups”, according to a statement released by the US embassy.

For its part, the Afghan presidential palace said via Twitter that the two sides discussed “bilateral ties, security, counter-terrorism and development”.

Speaking to ABC News from Afghanistan, McMaster said the Trump administration is weighing diplomatic, military and economic responses to the Taliban and ISIL, or the Islamic State of Iraq and the Levant group, in Afghanistan.

“Our enemy sensed that and they have redoubled their efforts and it’s time for us, alongside our Afghan partners, to respond,” said McMaster.

The visit comes just days after the US dropped the GBU-43 Massive Ordnance Air Blast (MOAB) bomb, one of the largest conventional weapons ever used in combat nicknamed the “mother of all bombs”, during an operation against ISIL, also known as ISIS, in the Achin district of Nangarhar province.

While military officials say the strike was based solely on tactical needs, it has led to speculation that Trump’s defence advisers are planning to escalate the war against armed anti-government groups in Afghanistan.

In a sharp warning to the US administration, Hamid Karzai, the former Afghan president, has called the bombing an “inhuman act, a brutal act against an innocent country”.

“A bomb of that magnitude has consequences for the environment, for our lives, for our plants, for our water, for our soil – this is poison,” he told Al Jazeera.

The GBU-43 is estimated to have killed nearly 100 fighters and no civilians, according to Afghan officials, although this has not been independently verified.

General John Nicholson, the US forces commander in Afghanistan, has requested thousands of additional troops to “break the stalemate,” between the Afghan forces and the Taliban, on top of the estimated 8,000 US troops already stationed in country.

Trump, who took office on January 20, had asked US officials, including some in the treasury and commerce departments, to work together to integrate the various political, diplomatic, military and economic responses available, McMaster said.

“We’ll give [President Trump] those options. And we’ll be prepared to execute whatever decision he makes,” he said.

McMaster praised anti-corruption efforts and assured Ghani that the US would continue to support and cooperate with Afghanistan on a number of issues.

Ghani told McMaster that “terrorism is a serious issue for the security of the world and the region” and if serious steps are not taken it would affect “generations” of people, according to the palace.

The Afghan government refers to both the Taliban and ISIL as “terrorists”.

Afghan forces have struggled to contain Taliban fighters since most international troops were withdrawn in 2014, leaving them to fight largely alone. 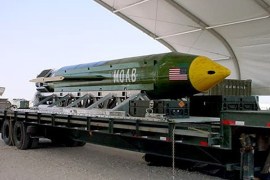 US says ‘mother of all bombs’ hits ISIL in Afghanistan 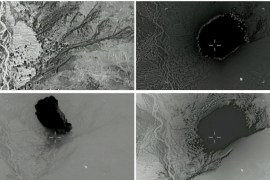 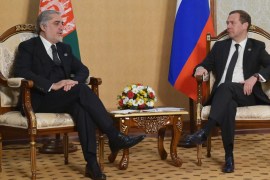