Qatar joined Russia and its allies in demanding an independent investigation into a chemical weapon attack in Syria that killed more than 80 people, saying the perpetrators must be punished to prevent future use of poison gas.

The poison gas attack on a rebel-held town in Idlib province earlier this month was a point of discussion. Images and video published shortly after the incident showed dozens of men, women, and children gasping for air, convulsing, and foaming at the mouth.

“The meeting saw the two sides agree on the importance of holding an independent investigation into the chemical attacks that took place in Khan Sheikhoun in Syria,” the official Qatar News Agency (QNA) reported.

The US has blamed Syria’s government for the deadly gas attack, and launched a barrage of Tomahawk cruise missiles against a government-controlled airbase in response.

Syria’s government says it had nothing to do with the bloodshed in Khan Sheikhoun, and staunch ally Russia has stood by those claims.

Russia blocked a UN Security Council resolution on Wednesday that demanded Syria cooperate with an investigation by the UN’s chemical weapons watchdog, saying the probe should be widened to include experts from many nations.

Qatar is a leading backer of rebels fighting Syria’s President Bashar al-Assad, who has received key military and diplomatic support from Russia during the war that has killed hundreds of thousands.

Al Jazeera’s Rory Challands, reporting from Moscow, said both sides were looking for signs of any give in the other’s position.

It was unclear, however, if either side achieved much from the meeting other than an agreement to keep talking, he said.

One thing the two countries did agree upon was the need for an independent probe into who released chemical weapons in Idlib.

According to QNA, Al Thani said the use of poison gas would continue if the perpetrators aren’t brought to justice.

“The horrific scenes in Khan Sheikhoun cannot be replicated and not punishing the perpetrators will be a gateway to repeating similar attacks in the future,” he said.

Assad said on Thursday the poison gas attack in Khan Sheikhoun was a “fabrication” to justify a US military strike.

Syria insists it turned over all chemical weapons stockpiles in 2013, and has invited international inspectors to visit the airbase targeted by the US, which Washington claimed served as a platform for the chemical weapon attack.

The Organisation for the Prohibition of Chemical Weapons has blamed Assad’s government for at least two attacks in 2014 and 2015 involving the use of chlorine.

In the lead-up to the government takeover of the rebel-held half of Aleppo last last year, Human Rights Watch reported on the government’s “systematic” use of chlorine gas, marking at least eight incidents in which military helicopters dropped the chemical into residential areas. 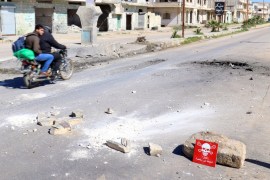 Russia, Syria and Iran warn US against further strikes 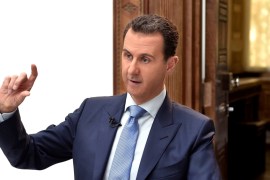 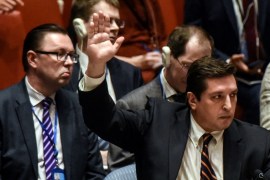