German federal prosecutors say they had no evidence that the sole suspect in custody for the bomb attack against the Borussia Dortmund football team bus was linked to the crime.

Three explosions rocked the team bus minutes after it had set off to a planned home Champions League game against French club Monaco, injuring defender Marc Bartra and one police officer.

The Federal Prosecutor’s Office said in a statement on Thursday there was no evidence that the detained man, identified as Abdul Beset and who arrived in Germany via Turkey at the start of 2016, had taken part in carrying out the attack.

However, they were seeking an arrest warrant to keep the 26-year-old Iraqi national in detention over allegedly having been a “member of the Islamic State group” in Iraq.

The man will appear before a judge who will decide whether to approve the arrest warrant issued by prosecutors, which will allow the man to be held for longer than 24 hours.

“The investigations have so far resulted in no proof that the suspect had taken part in the attack,” the federal prosecutor said in the statement.

It added that the man was a member of the “foreign terrorist organisation” in Iraq where he led a commando unit of 10 members that was involved in kidnappings, smuggling, extortion and killings.

On Wednesday, Frauke Koehler, spokeswoman for the federal prosecutor’s office, said the investigation was examining a possible “terrorist link” after three identical letters were found at the scene of the explosions.

“An Islamist background appears to be possible,” she said, noting that the letter demanded that Germany withdraw its deployment of Tornado reconnaissance missions in an international coalition fighting the ISIL group, and close the US airbase in the western German town of Ramstein.

“Two suspects from the Islamist spectrum have become the focus of our investigation. Both of their apartments were searched, and one of the two has been detained,” Koehler said.

The match, a quarter-final first-leg, was rescheduled for Wednesday, was won by Monaco amid heightened security.

Extra forces were deployed around team hotels and their buses took designated safe routes to the stadiums.

The assault was described by Dortmund city’s police chief as a “targeted attack” against the team, while Chancellor Angela Merkel said she was “horrified” by the “repugnant act”.

Germany has been on high alert since a series of attacks last year, including theChristmas market truck assault in Berlin in December that claimed 12 lives. 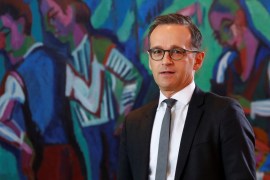 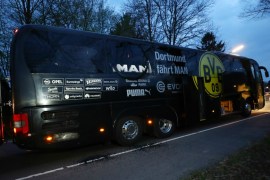 Defender taken to hospital after blasts go off near team bus before Champions League home match against Monaco.