At least five people have been killed and 10 wounded in a suicide bomb blast near government offices in the heart of Afghanistan’s capital, Kabul, according to police.

The incident on Wednesday happened when a suicide bomber on foot detonated his explosives about 100m from the gate of the presidential palace and close to where the Afghan finance ministry is located.

Al Jazeera’s Qais Azimy, reporting from Kabul, said both the location and the timing of the attack were very important.

“It happened in District N.2 – almost at the heart of Kabul and one of its safest parts,” Azimy said.

“It also happened at the end of the working day, when most of the government employees working in the presidential palace and the finance ministry were rushing to go to their homes.”

The Islamic State of Iraq and the Levant (ISIL) armed group claimed responsibility for the attack in an online post.

Azimy said ISIL’s emergence in Afghanistan and its ability to launch such attacks raised further concerns in a country already struggling to deal with an offensive by the Taliban armed group.

“The people of Kabul and Afghanistan are now more worried because the Afghan security forces are really having a hard time to fight the Taliban, and no one is looking forward for a new group to emerge in this country,” Azimy said.

ISIL’s offshoot in Afghanistan in Pakistan, known as the so-called Khorasan Province, was created in 2015.

The Afghan Taliban, who are trying to overthrow the US-backed government in Kabul, is opposed to it and the two have clashed as they seek to expand territory and influence.

US officials say intelligence suggests ISIL is based overwhelmingly in Nangarhar and neighbouring Kunar province.

Estimates of its strength in Afghanistan vary. US officials have said they believe its has only 700 fighters but Afghan officials estimate it has about 1,500. 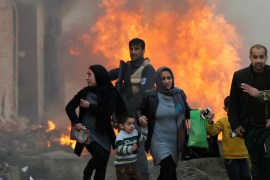