Videos posted to social media showing security guards violently removing a passenger from a United Airlines flight in the US have sparked outrage.

The incident took place on Sunday, before the departure of Flight 3411 from Chicago’s O’Hare Airport to Louisville.

Several clips posted online by fellow passengers show the officers forcibly removing the man by pulling him out of his seat and dragging him by his arms down the aircraft’s aisle.

Passengers said the man, who can be heard screaming, was injured as he was being dragged off, with blood coming out of his mouth.

@united @FoxNews @CNN not a good way to treat a Doctor trying to get to work because they overbooked pic.twitter.com/sj9oHk94Ik

Passengers said on social media that United had overbooked the flight and wanted four passengers to give up their seats to make way for airline employees.

When no one volunteered, four passengers were selected and asked to leave.

The man in the video, who was one of the four, said he was a doctor and needed to see patients the next day, according to passengers’ online statements.

After being violently ejected, the man can be seen returning on the plane, though with blood on his face. In another video, clearly distressed, he can be heard repeating “I have to get home.”

The incident caused an outcry on social media, with some calling for a United Airlines boycott, while many pointed out that it was an Asian man who was the victim of the violent removal. Some also expressed outrage that other passengers did not stop the officers from abusing him.

Time to boycott United Airlines! Forcing people off flights, by dragging them down the aisle! Unacceptable!!

If @United had done this to a white passenger, it would have also been vile and unacceptable. But they *chose* to brutalize an Asian.

Anyone else notice that it was an Asian man that got attacked on that United flight? Cause Stephanie sure didn't get thrown to the ground…

No one @United wants to have a job. And everybody wants to be sued. That is the only explanation for that video.

As soon as the officers got abusive on the United flight, some passengers should have volunteered to get off.

After the outcry, United said in a series of tweets: “Flight 3411 from Chicago to Louisville was overbooked. After our team looked for volunteers, one customer refused to leave the aircraft voluntarily and law enforcement was asked to come to the gate.

“We apologize for the overbook situation. Further details on the removed customer should be directed to authorities.” 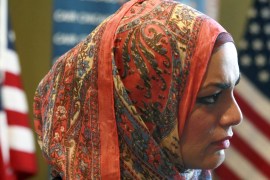 US airline apologises over anti-Muslim discrimination