South Africa‘s new finance minister, Malusi Gigaba, said there was a need “to radically transform the South African economy” as pressure mounted on President Jacob Zuma after a dramatic cabinet reshuffle that rocked the country’s markets and currency.

On Friday, Zuma, head of the ruling African National Congress (ANC), said he was making room for new talent and ideas, as he announced changes to 10 of the country’s 35 ministries, including finance, energy, police and tourism.

Gigaba, though, said he was committed to protecting South Africa’s cherished investment-grade credit ratings, which analysts have said are threatened by Gordhan’s removal.

Radical economic change in the political language of ANC means the redistribution of wealth, land and opportunity to the black majority.

“The ownership of wealth and assets remains concentrated in the hands of a small part of the population. This must change,” Gigaba, who was previously Home Affairs minister, said.

“I am fully aware that we are at a highly politicised, polarised and contentious moment in the history of our young democracy. I will not be distracted by external issues.”

But he added fiscal policy would not be done simply in the interests of big business and capital.

“For too long, there has been a narrative or perception around Treasury, that it belongs primarily and exclusively to ‘orthodox’ economists, big business, powerful interests and international investors. With respect, this is a people’s government,” he said.

On Thursday, the Economic Freedom Fighters (EFF) opposition party appealed to the country’s highest court to order parliament to begin impeachment proceedings against the president for lying to the legislative body.

OPINION: South Africa’s future in the ICC is still uncertain

The EFF called it “a last resort”, with party leader Julius Malema accusing parliament, which is dominated by the ANC, of failing in its duty to hold the president accountable.

Deputy President Cyril Ramaphosa, who is one of the leading candidates to replace Zuma as ANC president, expressed his “strong objection” to Gordhan’s removal, describing it as “totally, totally unacceptable”.

Al Jazeera’s Fahmida Miller, reporting from Pretoria, said protesters outside the National Treasury in the capital were angry with “yet another presidential decision they say only serves Zuma’s interest”.

Hundreds of protesters also gathered in front of the parliament building in Cape Town, carrying posters reading: “Zuma must fall” and “Hands off the treasury”.

Some placards called Zuma a “tsotsi”, a South African slang word for “criminal”. 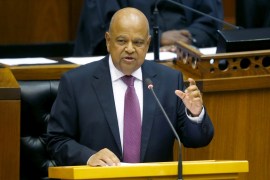 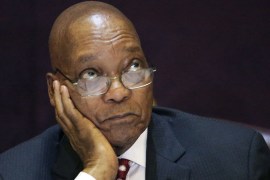