A bomb blast that targeted a police training facility in Egypt’s Nile Delta has killed one policeman and wounded 15 people, including 12 other policemen, according to officials.

Egypt’s interior ministry said on Saturday that the explosive device was hidden in a motorbike parked near the training centre in the city of Tanta.

The policeman killed was among the wounded taken to hospital, where he succumbed to his wounds several hours after the attack.

A newly emerged group that calls itself Liwaa al-Thawra, or the Revolution Brigade, claimed responsibility for the bombing in a statement posted on social media.

“A training centre for the police militias has been targeted in Gharbia province with a highly explosive device … Our fighters withdrew safely after completing the mission,” the group’s statement said without giving further details.

Egypt faces an armed movement led by the Islamic State of Iraq and the Levant (ISIL, also known as ISIS) armed group’s branch in North Sinai, where hundreds of soldiers and police have been killed.

There have also been attacks in Cairo and other cities. 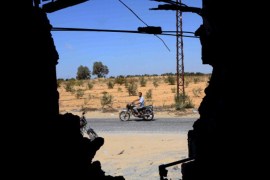