Spring across the United States is known for its changeable and often severe weather. And this week has lived up to the season’s expectations with destructive tornadoes, damaging hail and wildfires.

The cold front’s passage by this latest storm also brought some extreme winds to the Central Plains, Great Lakes and Northeast just in the last few days.

Power was knocked out to over 1,200,000 customers in several states this week. Crews had already been put into place ahead of storm in anticipation of down power lines then worked late into Wednesday evening restoring electricity to hundreds of communities.

At the Rochester Airport in the state of New York, a wind gust of 130 kilometres per hour was recorded on Wednesday. But it was at the Willow Run airport in Ypsilanti, Michigan where the gusty winds caused a plane to slide off the runway, causing extensive damage to the fuselage.

In Woodland, Michigan powerful winds caused extensive structural damage to that community. At their local elementary school over 200 children had to be evacuated after teachers noticed the roof shifting above them. All students were safely moved before the roof eventually blew off completely.

As a safety precaution the Skydeck at the Willis Tower in Chicago, formerly known as the Sear Tower, was also closed on Wednesday morning because of the dangerous winds.

It was in Detroit, Michigan where the winds helped to fuel a deadly house fire. Five people were killed and four injured when fire swept through an apartment building. Wind gusts topped 97 kph, spreading the flames quickly through the complex.

Winds will begin to ease through the day on Thursday as the storm system moves away from the region. 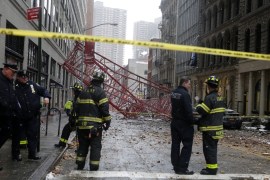 Fatal accident occurs in Manhattan’s Tribeca neighbourhood when crane was being lowered as a precaution because of wind. 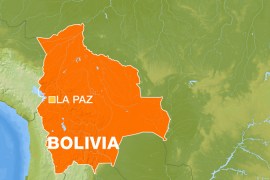