American women demonstrating how vital women are to the US economy have stayed home from work, joined rallies or wore red, as International Women’s Day was observed with a multitude of events around the world.

The Day Without a Woman protest in the US was promoted by organisers of the vast women’s marches that drew more than 1 million Americans the day after President Donald Trump’s inauguration.

The turnout this time was much smaller, with crowds in many places numbering in the hundreds. There were no immediate estimates of how many women heeded the call to skip work some schools were closed as not enough staff would turn up for work.

Many seized the opportunity to protest against Trump and his policies concerning women.

“I believe now more than ever it’s important to stand up for women’s reproductive rights, LGBTQ, the environment,” a young woman who left her retail job to join a protest in New York, told Al Jazeera. “With this administration we have to take our rights seriously and make sure everyone is heard and represented.”

An older man also said he came out because of Trump.

“I think he discriminates against women, has no respect for women and that’s why I want to be here. For women.”

A crowd of about 1,000 people, the vast majority of them women, gathered on New York’s Fifth Avenue in the shadow of Trump Tower. Women wore red and waved signs reading “Nevertheless she persisted,” ”Misogyny out of the White House now” and “Resist like a girl”.

At least 13 protesters were arrested for “disorderly conduct” after sitting in the street near the Trump Hotel, disrupting traffic.

Some of the main organisers of the Women’s March – Tamika Mallory, Linda Sarsour, Carmen Perez and Bob Bland –  were among those arrested.

Elsewhere in the city, a statue of a fearless-looking girl was placed in front of Wall Street’s famous charging bull sculpture. The girl appeared to be staring down the animal. A plaque at her feet read: “Know the power of women in leadership. SHE makes a difference.”

State Street Global Advisors, the firm behind the statue, said it was a way of calling attention to the lack of gender diversity on corporate boards and the pay gap of women working in financial services.

The nation-wide event was inspired in part by the Day Without an Immigrant protest held last month.

School in such places as Prince George’s County, Maryland; Alexandria, Virginia; and Chapel Hill, North Carolina, cancelled classes after hundreds of teachers and other employees let it be known they would be out.

In Providence, Rhode Island, the municipal court closed for lack of staff members.

In Washington, DC, more than 20 Democratic female representatives walked out of the Capitol to address a cheering crowd of several hundred people.

Dressed in red, the lawmakers criticised efforts to repeal the Affordable Care Act and eliminate federal funding for Planned Parenthood.

House Minority Leader Nancy Pelosi encouraged more women to go into politics, saying, “You have marched for progress. Now you must run for office.”

What are you doing for #DayWithoutAWoman?

In front of the White House, dozens protested against a US policy that bans international NGOs from providing abortion services or offering information about abortions if they receive US funding.

Trump imposed what critics call the “global gag rule” in an executive order he signed just after taking office.

Protest for the privileged?

Some criticised the Day Without a Woman strike, warning that many women cannot afford to miss work or find child care.

Organisers asked those unable to skip work to wear red in solidarity.

“It’s almost impossible for a single mother, a low-income worker, a minimum-wage earner to take the day off,” Sarah Sophie Flicker, a protest organiser in New York, told Al Jazeera. “Everyone here stands in solidarity with women who can’t strike.”

As part of the protest, women were also urged to refrain from shopping.

OPINION: Women of the world, unite!

A few hundred people gathered on the lawn outside Los Angeles City Hall to rally for women’s rights.

Hundreds of women dressed in red and holding signs with photos of their local lawmakers gathered at the Utah Capitol to remind legislators they are closely watching how they handle women’s issues.

“We wanted to represent every marginalised woman whose voice doesn’t count as much as a man’s,” Warren, a sales associate in the male-dominated construction industry, told AFP.

Trump took to Twitter to salute “the critical role of women” in the US and around the world. He tweeted that he has “tremendous respect for women and the many roles they serve that are vital to the fabric of our society and our economy”.

The White House said none of its female staff members skipped work in support of International Women’s Day.

Women make up more than 47 percent of the US workforce and are dominant among registered nurses, dental assistants, cashiers, accountants and pharmacists, according to the census.

They make up at least a third of physicians and surgeons, and the same with lawyers and judges. Women also account for 55 percent of all college students. 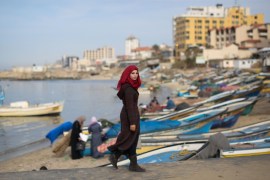 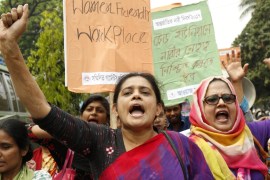 A quick look at how International Women’s Day is being marked around the world.