North Korea has fired four ballistic missiles into the sea off Japan’s northwest coast, South Korean and Japanese officials said, days after the reclusive state promised retailiation over US-South Korea military drills it sees as a preparation for war.

Seoul said four missiles were fired from North Pyongan province into the East Sea on Monday and that South Korea and the United States were “closely analysing” tracking data for further details.

“This clearly shows North Korea has entered a new stage of threat,” Abe said in parliament.

“The launches are clearly in violation of [UN] Security Council resolutions. It is an extremely dangerous action.”

South Korea’s military said the missiles were unlikely to have been intercontinental ballistic missiles which could reach the US, but flew on average 1,000km and reached a height of 260km.

Some of the missiles landed in waters as close as 300km to Japan’s northwest coast, Japan’s Defence Minister Tomomi Inada said in Tokyo.

South Korea’s acting president, Hwang Kyo-ahn, condemned the launches and said the country would swiftly deploy a US anti-missile defence in the face of angry objections from China.

“These missile tests are creeping closer to Japan and we assume North Korea can hit most of South Korea,” Robert Kelly, professor of political science and diplomacy at Pusan National University, told Al Jazeera.

“Bombing North Korea can be hugely dangerous because it can easily hit the South Korean capital. Missile shields are probably the best defence for the future.”

Pyongyang carried out two atomic tests last year and a series of missile launches, but Monday was only the second time its devices entered Japan’s EEZ. 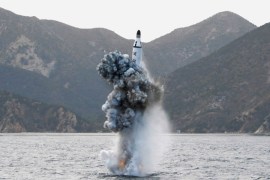