Defying pressure for a strong increase in defence spending, China said on Saturday that its military budget this year would grow by about seven percent, its slowest pace since 2010.

Last year, with the economy slowing, the defence budget recorded its lowest increase in six years, 7.6 percent, the first single-digit rise since 2010 after a nearly unbroken two-decade run of double-digit increases.

With the administration of new US President Donald Trump planning a 10 percent boost in military spending in 2017, and worries about potential disputes with the US over the South China Sea and the status of Taiwan, some in China had been pressing for a forceful message from this year’s defence budget.

“It’s not enough,” a source with ties to senior Chinese officers told the Reuters news agency. “A lot of people in the military won’t be happy with this.”

China’s military build-up has rattled nerves around the region, particularly because Bejing has taken an increasingly assertive stance in its territorial disputes in the East and South China Seas and over Taiwan, which it claims as its own.

But there are concerns for China’s military, including how to deal with the 300,000 troops President Xi Jinping announced in 2015 would be cut, mainly by the end of 2017.

“It’s not yet certain what is going to happen to these people and the military is clearly hoping for more money to deal with them,” one senior Beijing-based Asia diplomat said before this year’s defence budget was announced.

A seven percent rise for this year based on last year’s budget would bring the figure to 1.02 trillion yuan ($147bn), still only a quarter or so of the US defence budget.

Graham Ong-Webb, a research fellow at Rajaratnam School of International Studies in Singapore, told Al Jazeera that China’s military spending tended to focus on procurement and on modernising its capabilities.

“So, even though it’s a relatively small amount, this amount is fielding new capabilities for contingencies in the South China Sea,” Ong-Webb said.

The defence spending figures will be published in full on Sunday. 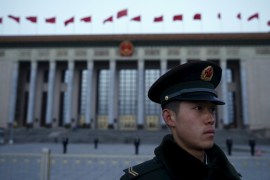 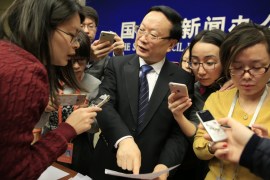