Flynn was forced to resign as Trump’s national security adviser in February over contacts with Russian officials.

“General Flynn certainly has a story to tell, and he very much wants to tell it, should the circumstances permit,” said a statement on Thursday from Flynn’s lawyer, Robert Kelner.

Testimony from Flynn could help shed light on the conversations he had with Russian Ambassador to the United States Sergey Kisylak last year when he was the national security adviser for Trump’s presidential campaign.

Kelner said discussions had taken place about Flynn’s availability to testify with officials of the intelligence committees of both the US Senate and the House of Representatives.

Both committees are investigating allegations of Russian meddling in the US election campaign last year as well as possible ties between the Trump campaign and Russians.

Flynn stepped down after revelations that he had failed to disclose talks with the Russian ambassador before Trump took office about US sanctions on Moscow and mislead Vice President Mike Pence about the conversations.

Questions remain about the scope of the discussions and what other contacts took place between other Trump advisers with the Russians.

During a US Senate Intelligence Committee hearing on Thursday, Democratic Senator Mark Warner alleged that Russia attempted to undermine the 2016 US presidential election with a propaganda campaign “on steroids”, using trolls and networks of hacked or infected devices to flood social media with disinformation.

US intelligence agencies have said Russia hacked emails of senior Democrats and orchestrated the release of embarrassing information in a bid to tip the presidential election in favour of Trump, whose views were seen as more in line with the Moscow’s.

Russian President Vladimir Putin denied the accusations on Thursday calling them “lies”. When asked if Russia interfered in the US vote Putin said, “Read my lips: No.”

“If the president puts Russian salad dressing on his salad tonight, somehow that’s a Russia connection,” he said in an exchange with reporters.

The Wall Street Journal, citing officials with knowledge of the matter, reported that Flynn had sought immunity from the FBI and the House and Senate intelligence panels in exchange for his testimony. The newspaper said he had so far found no takers.

The House denied the Journal report. “Michael Flynn has not offered to testify to HPSCI in exchange for immunity,” committee spokesman Jack Langer said in a statement.

The FBI declined to comment. The Senate committee did not immediately respond to a request from Reuters for comment.

Kelner’s statement did not mention the FBI.

He said Flynn “is now the target of unsubstantiated public demands by Members of Congress and other political critics that he be criminally investigated”.

Kelner said Flynn would not “submit to questioning in such a highly politicised, witch hunt environment without assurances against unfair prosecution”. 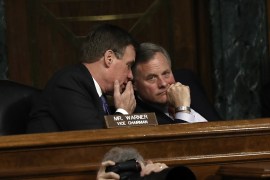 US senator accuses Russia of ‘propaganda on steroids’