President Donald Trump has blasted a probe into his team’s ties to Russia as an opposition “witch-hunt,” defending his former top aide Michael Flynn’s decision to ask for immunity in the case.

Trump’s ex-national security adviser, whose links to Russia are one focus of the investigation, has sought protection in exchange for his testimony to the FBI and congressional committees.

Flynn’s lawyer said in a statement on Thursday that his client has “a story to tell, and he very much wants to tell it, should the circumstances permit”.

But two key committees in the probe, the House and Senate Intelligence Committees, both suggested the immunity proposal was premature.

“Mike Flynn should ask for immunity in that this is a witch hunt (excuse for big election loss), by media & Dems, of historic proportion!”

Flynn could be a key witness as the FBI, as well as the House and Senate intelligence committees, seek to determine whether Trump advisers colluded with Russia’s interference in last year’s presidential election.

READ MORE: US senator accuses Russia of ‘propaganda on steroids’

But Adam Schiff, the senior Democrat on the House panel, said there was “still much work and many more witnesses and documents to obtain before any immunity request from any witness can be considered”.

“We should first acknowledge what a grave and momentous step it is for a former national security adviser to the president of the United States to ask for immunity from prosecution,” Schiff said.

A close adviser to Trump’s 2016 campaign, Flynn was forced to step down after just 24 days in his White House job after misleading the vice president about conversations he had with Russian Ambassador Sergey Kislyak after the election.

He is also in focus over receiving $33,000 from Russian television RT to attend a 2015 gala in Moscow where he sat with Russian President Vladimir Putin and $530,000 from Turkey for lobbying services.

But Flynn is not the only Trump associate to have had contacts with Russia during the campaign.

Investigators want to know whether there was any collusion between them and Moscow’s concerted effort last year to hurt Trump’s Democratic election rival, Hillary Clinton.

The Russian government has denied the allegations and denied that it hacked emails of Democratic groups and released information to tip the election towards Trump, who has called for better US relations with Moscow.

What Flynn could tell investigators is unknown. US prosecutors can offer a suspect immunity in exchange for information that can incriminate others in a case, particularly larger figures.

Critics assailed the president over his tweet, noting that during last year’s campaign, Trump said in a speech that “If you’re not guilty of a crime, what do you need immunity for?”

Asked by journalists on Friday if Trump though Flynn was guilty of something, White House spokesman Sean Spicer said the president just wants Flynn to testify.

“He thinks Mike Flynn should go testify and do what he has to do to get the story out,” Spicer said.

To avoid getting lost in the reports of links between Trump associates and Russia, read this. 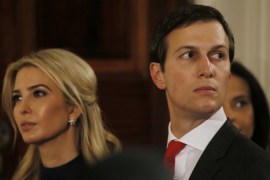 Jared Kushner to be questioned over ties to Russia