Geneva, Switzerland – The Syrian government delegation has accused the main opposition group at UN-led negotiations of holding the talks “hostage” in their final hours, adding that it would hold the opposition responsible for any failure.

After a week of indirect talks, little progress has been made in getting the two sides to the negotiating table.

And as a ceasefire on the ground in Syria steadily crumbles, it remains unclear whether the rivals will be able to agree even on the basic format of negotiations before this round of talks comes to a close.

“This did not come as a surprise to us because some members of the Riyadh delegation include members of armed terrorist groups.”

In his first address to the press in nearly three days, Jaafari accused the High Negotiations Committee (HNC) – the main opposition umbrella group formed in the Saudi capital – of refusing to unify with two smaller opposition groups.

All real progress in the latest round of Geneva talks has been held up by arguments on two central issues: the make-up of the opposition delegation and the potential inclusion of “terrorism” as a core subject of discussion.

Adding ‘terrorism’ to the agenda

De Mistura, the UN mediator, convened the talks with the goal of tackling UN Security Council Resolution 2254, a document that lays the basis for a political transition based on three “baskets”: accountable governance, a new constitution and UN-supervised elections.

But government representatives have demanded that a fourth basket focused entirely on “anti-terrorism” be included in the agenda before signing on to continue negotiations.

“We discussed counterterrorism as a basket on equal footing with the other baskets,” Jaafari said on Thursday.

“Those who reject discussing this basket are the so-called Riyadh delegation … the Moscow and Cairo [platforms] have agreed.”

The HNC views the other two opposition groups – the Cairo and Moscow platforms – as pro-Russia, government-tolerated groups that have no real base of support, and has urged their members to join up with the Riyadh-based group instead.

READ MORE: ‘Hope is all I have’, Syrian journalist says

In a press conference directly following Jaafari’s address, lead opposition negotiator Nasr al-Hariri dodged questions on whether the opposition would accept the inclusion of a fourth subject of discussion.

The opposition has been hesitant to add “terrorism” to the agenda over fears that the government would use it to sideline discussions on political transition – the opposition’s central goal.

Yahya al-Aridi, a political and media adviser to the HNC, told Al Jazeera that it was “a given” that the opposition was fighting “terrorism”, but refused to confirm whether the HNC planned on agreeing to its inclusion.

“It’s not a subject of debate, it’s a plague we’ve been suffering from for years,” he said. “We should be the ones discussing terrorism.”

In an attempt to calm opposition fears during closed-door discussions over the past week, the UN envoy has reportedly said that the new “basket” would also include to the government’s use of barrel bombs and chemical weapons on civilian population centres.

The opposition has also said that any discussion on “terrorism” should include the actions of Iran-backed militias fighting on behalf of the government.

In rushed morning meetings on Thursday, the opposition discussed countermeasures to government demands, according to a  western diplomat, which included the “transformation” of the proposed fourth basket “into a more comprehensive one that focused jointly on ceasefire and terrorism”.

Discussions also included possible trust-building measures, such as the release of detainees or the end of government sieges on rebel-held areas. They also reportedly discussed the inclusion of a Russian guarantee that the three other baskets – governance, elections, and a constitution – would be discussed without preconditions.

If the opposition refuses to add “terrorism” to the agenda, according to a diplomat involved in the talks, who asked to remain anonymous, the government would effectively have an excuse to walk away from negotiations.

“They have an ‘out’ card if the opposition refuses to discuss terrorism,” he said.

De Mistura wants the opposition to “go along with the process” because Jaafari will not deal with anything related to a political transition until the “terrorism” issue is cleared up, the diplomat said.

While some members of the HNC’s higher negotiating team may be willing to accept the addition of a “ceasefire and terrorism” basket, they would need the go-ahead from a majority of the more than 20-member group in order to move forward.

Another diplomatic source told Al Jazeera that the opposition was “more or less happy” about negotiating “all four baskets”, which has left Jaafari and the government delegation “backed into a corner” on whether they are willing to negotiate a political transition.

De Mistura is desperate to achieve tangible results this time around in Geneva, according to aides and diplomats close the UN envoy.

If he is unable to officially secure a mutually agreed agenda by the time the talks wrap up over the weekend, he will most likely not be the UN moderator in the next round – if there is one.

De Mistura reportedly resubmitted to both sides at the beginning of the week a 12-point memorandum – much of which was already agreed upon by both parties last year – in an attempt to establish common ground between the warring sides.

But the government delegation returned the paper to the envoy on Wednesday with “substantive” changes, which some diplomats described to Al Jazeera as “spoiler tactics” and attempts to deflect talks away from “substantive issues”.

Both sides were due to meet the UN envoy on Friday in what could be the last formal meetings of this round of talks. 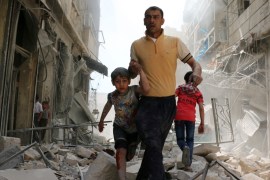 Moscow and Beijing prevent UNSC from imposing sanctions on Syrian government for alleged use of chemical weapons. 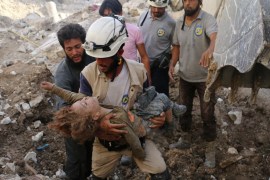