The remains of two UN investigators and their Congolese interpreter who went missing two weeks ago have been found in Democratic Republic of Congo‘s Kasai-Central province, the government and the UN said.

In a statement issued in New York, UN Secretary-General Antonio Guterres confirmed that the remains of the two investigators had been found and said the world body would conduct an inquiry.

“Michael and Zaida lost their lives seeking to understand the causes of conflict and insecurity in the DRC in order to help bring peace to the country and its people,” the UN chief said.

The UN researchers were looking into recent large-scale violence and alleged human rights violations by the Congolese army and local militia groups when they went missing.

Guterres said the United Nations would cooperate with Congolese authorities in searching for the four Congolese nationals who accompanied the UN officials.

“In case of criminal acts, the United Nations will do everything possible to ensure that justice is done,” the UN chief said.

Government spokesman Lambert Mende said one of the bodies, that of the woman, had been beheaded.

The confirmation came a day after Sharp’s father, John Sharp, wrote on his Facebook page that the bodies of two Caucasians had been found in shallow graves in the search area, saying there was a high probability the dead were his son and his son’s colleague.

The disappearance is the first time UN experts have been reported missing in Congo, Human Rights Watch said.

Parts of Congo, particularly the east, have experienced insecurity for decades, but violence in the Kasai region in central Congo represents a new expansion of tensions.

More than 400 people have been killed and more than 200,000 displaced since then, according to the UN.

Militias have been blamed for atrocities and government forces are accused of attacking civilians.

The militia reportedly killed more than 40 police officers in an ambush on Saturday and only spared those who spoke their local language. They were reportedly beheaded.

The UN has almost 19,000 troops deployed in Congo, its largest and costliest peacekeeping mission. 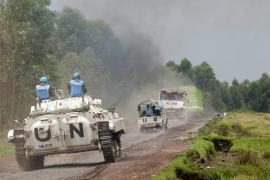 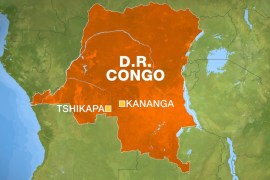 Officials say the rebel fighters attacked the police as they were driving from Tshikapa to Kananga. 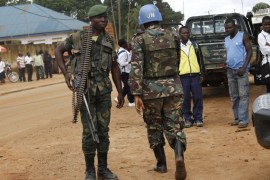