South African anti-apartheid activist Ahmed Kathrada has been laid to rest in Johannesburg.

Kathrada, who spent 26 years in jail for acts of sabotage against South Africa’s white minority government, died on Tuesday at the age 87 after struggling with a brief illness following brain sugery, his foundation said.

A number of dignitaries attended the funeral, including former South African president and Kathrada Foundation board member Kgalema Motlanthe, who spoke at the service.

‘Zuma will not attend’

President Jacob Zuma, who had been criticised by Kathrada, did not attend the funeral, the president’s office said.

“President Zuma will not attend the funeral and memorial service in compliance with the wishes of the family,” according to a statement issued by the president’s office before the service.

Al Jazeera’s Tania Page, reporting from Johannesburg, said the family had welcomed Zuma to attend, but asked him not to speak.

Page said tension between Kathrada and Zuma “stemmed from the fact that Ahmed Kathrada was not a man to hold back and spoke out when he thought it was necessary”.

She added that, according to Kathrada’s foundation, the anti-apartheid activist put the values and ethics of the country ahead of any loyalty to any party.

Last year, Kathrada joined a movement of veteran figures who were critical of the governing ANC and its current leaders, particularly  Zuma, who has been mired in mounting allegations of corruption. He wrote an open letter to Zuma, asking him to step down.

Kathrada was born on August 21, 1929, to Indian immigrant parents in a small town in northwestern South Africa.

His activism against the white-minority apartheid regime started at the age of 17, when he was one of 2,000 “passive resisters” arrested in 1946 for defying a law that discriminated against Indian South Africans.

He was among those tried and jailed alongside Mandela in the Rivonia trial in 1964, which drew worldwide attention and highlighted the brutal legal system under the apartheid regime.

Kathrada was sentenced to life imprisonment in 1964 and spent 26 years and three months in prison, 18 of which were on Robben Island.

After the end of apartheid, he served from 1994 and 1999 as parliamentary counsellor to President Mandela in the first African National Congress government. 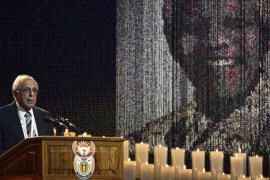 Kathrada, beloved by millions of South Africans, spent 26 years in jail, many of them alongside Nelson Mandela. 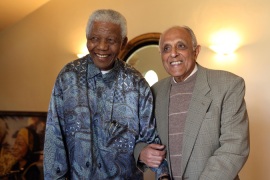