A US-backed alliance of Syrian Kurdish and Arab fighters has captured a strategic airbase from ISIL in northern Syria in the first major victory for the group since the US airlifted the forces behind enemy lines last week.

The Kurdish-led Syrian Democratic Forces (SDF) announced on Sunday that they captured the Tabqa airbase, 45km west of Raqqa, the Islamic State of Iraq and the Levant (ISIL) group’s de facto capital in Syria.

SDF forces were also battling for the nearby Tabqa dam, held by ISIL, which was forced out of service on Sunday after its power station was damaged.

Earlier this week, US forces airlifted SDF fighters behind ISIL lines to allow them to launch the Tabqa assault, and on Friday the alliance reached one of the dam’s entrances.

SDF forces were within 10km of Raqqa from the north, and aimed to effectively surround the city before launching an assault.

Tabqa airbase was captured by ISIL fighters from the Syrian government in August 2014.

Shortly afterwards, the group announced it had killed about 200 government soldiers at the base, in a mass killing recorded and distributed on video over social media.

Meanwhile there were conflicting reports over whether civilians had begun evacuating Raqqa due to concerns over the stability of the nearby Tabqa Dam.

ISIL fighters said US-led coalition air strikes had locked up the dam’s gates, causing the water level behind it to rise. 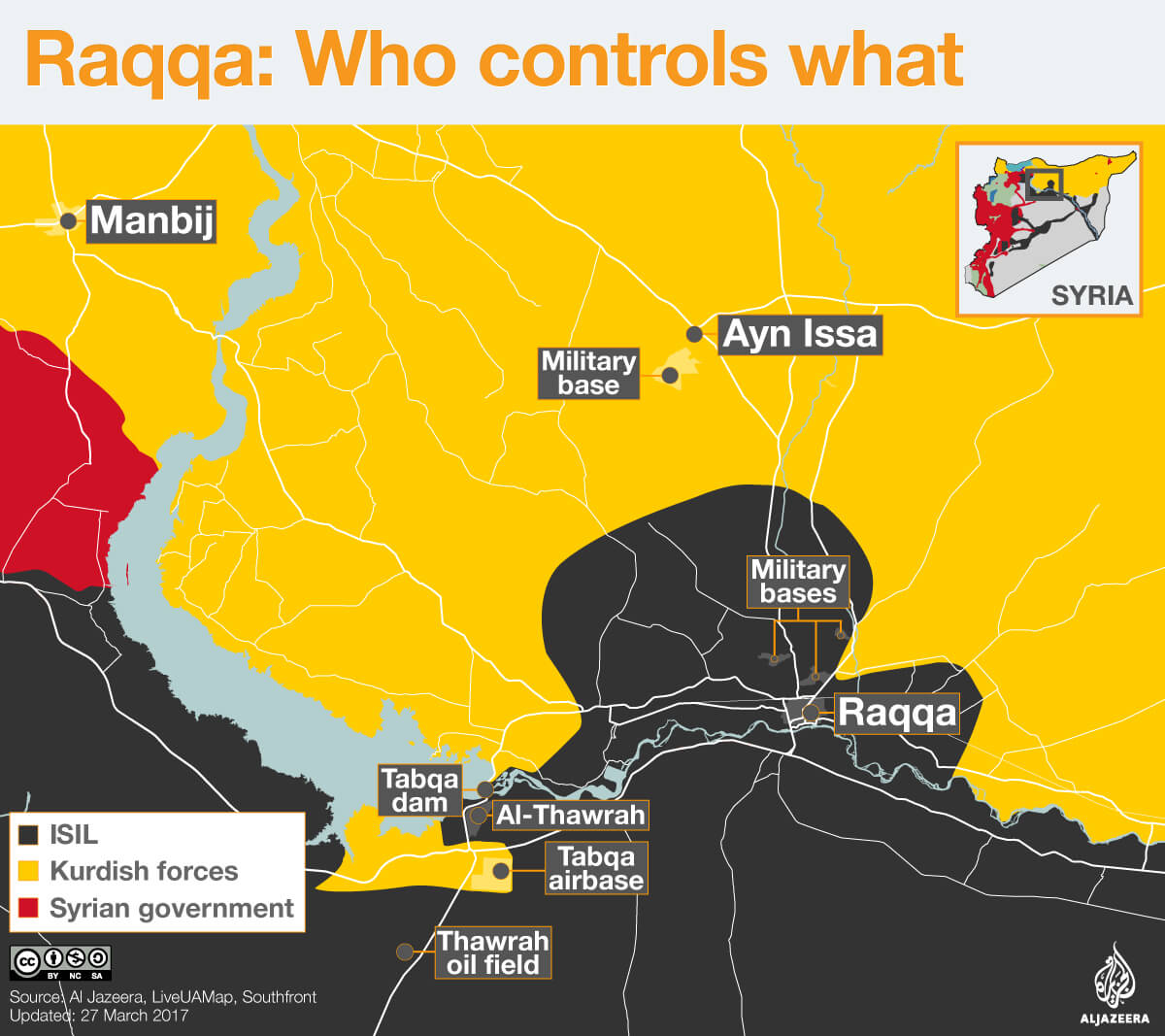 The director of the Syrian government’s General Authority of Euphrates Dam that formerly operated the huge project blamed US air raids for disrupting internal control systems and putting the dam out of service, and warned of growing risks that could lead to flooding and future collapses.

“Before the latest strikes by the Americans, the dam was working. Two days ago, the dam was functioning normally,” Nejm Saleh told Reuters news agency.

“God forbid … there could be collapses or big failures that could lead to flooding,” Saleh said.

An SDF spokesman denied that coalition strikes hit the dam structure and said the airdrop landing last week was conducted to prevent any damage to the main structure by engaging the rebels away from the dam.

“The capture of the dam is being conducted slowly and carefully and this is why the liberation of the dam needs more time,” Talal Silo said, adding that ISIL fighters had dug inside the dam knowing they would not be hit for fear of damaging the dam.

The Syrian Observatory said it had also learned from its own sources that the dam had stopped functioning, but that ISIL remained in control of its main operational buildings and turbines.

US-backed Kurdish forces were in control of a spillway north of the dam “which can be used to alleviate pressure on the dam if need be,” the coalition said in a letter to AP news agency.

The coalition said the dam had not been structurally damaged, to its knowledge, and that it has not targeted the dam.

The SDF announced that it would “suspend its operations” in the vicinity of the dam on Monday for four hours so that engineers could access it and carry out much needed repairs.

The UN warned this year of the risk of catastrophic flooding from the dam.

The Syrian Observatory and the activist-run Raqqa 24 media centre reported that as of Sunday there were no evacuations in Raqqa.

The reports from Raqqa came as a leading Syrian opposition group called on the US-led coalition to stop targeting residential areas in and around the city.

The Syrian National Coalition (SNC) said in a statement that it was “increasingly concerned” about civilian casualties in the campaign against the group. The exiled opposition coalition is taking part in UN-mediated talks in Geneva.

The SNC said it believed coalition forces were behind an air strike that killed at least 30 civilians sheltering in a school in the countryside outside Raqqa on March 21. The coalition has said it is investigating.

The Syrian Observatory said coalition air strikes had killed 89 civilians in Raqqa province in the past week.