An avalanche has killed seven Japanese high school students and a teacher on a mountain-climbing outing, and injured 40 more.

More than 100 troops were deployed in a major rescue mission after the avalanche hit ski slopes in Tochigi prefecture north of Tokyo on Monday. Television footage showed rescuers climbing the mountainside as ambulances stood by.

A total of 52 students and 11 teachers from seven high schools were on a three-day mountaineering expedition when disaster struck.

A warning had been issued for heavy snow and possible avalanches from Sunday until Monday in the area, with the local weather agency forecasting snowfall of some 30 centimetres.

In the latest update seven students and one teacher, mostly from Otawara High School in Tochigi, were found with no vital signs, an official with a prefectural disaster task force told AFP news agency.

In Japan, deaths in such circumstances are not announced officially until doctors can confirm them.

Some 40 people have been injured, including two students in serious condition, the prefectural official said.

“All the people have been carried down from the mountain and they are now being transported to hospital,” he said.

The avalanche struck in the town of Nasu 120km north of Tokyo on the final day of the excursion, Tochigi authorities said, adding that soldiers were brought in at the request of the prefecture’s governor.

Local media cited experts as saying it was likely a surface avalanche, caused by a heavy snowfall accumulating on a previous deposit of slippery snow.

“This (outing) is an annual event and we never had a major accident before,” one of the teachers told Jiji Press. “I am really shocked.”

The ski resort had been closed for the season, according to the operator’s website, with the lift stopped and no skiers at the site.

But some of its facilities were made available for the high school mountaineering trip organised by local physical education authorities. 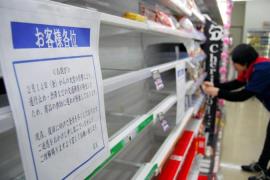 Sixteen have been killed in “snow related incidents”, while thousands are stranded in Tokyo and surrounding area. 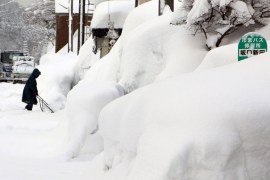 The current weather pattern over the Sea of Japan is bringing windy, cold and snowy weather to much of the country.