Authorities in Belarus have detained protesters as they attempted to hold a banned rally in the capital Minsk, amid rising public anger over falling living standards and an unpopular tax on the unemployed.

News agencies reported that scores of people, including 10 journalists, were taken away by riot police on Saturday, a day after authorities told organisers the event would be illegal.

Amnesty International said on its Russian-language Twitter account that dozens of people were grabbed off the street “indiscriminately”. Some were beaten, according to reports.

The wide-scale detentions were also reported by Viasna, a human rights group, which said that police had earlier raided its offices and briefly detained about 60 activists.

Al Jazeera’s Rory Challands, reporting form Minsk, said smaller groups of people gathered around the city after the main demonstration was blocked by police. He added though, that police soon turned up at those small protests as well.

Opposition leader Vladimir Nekliayev, who was set to speak at the protest, was stopped at the border on Saturday morning on his way to Minsk, his wife told the AFP news agency.

The planned demonstration was the latest in a wave of protests since February that pose the biggest challenge in years to President Alexander Lukashenko, who has ruled the ex-Soviet state for nearly a quarter of a century.

Earlier this week, Lukashenko accused a “fifth column” of plotting to overthrow him with the help of foreign-backed fighters. On Friday, he built on this theme, saying “someone wants to blow up the situation, and they use our scumbags”.

Belarus has been in recession for the past two years, suffering the knock-on effects of an economic downturn in Russia and a sharp fall in oil prices.

Uladzimir Matskevich, a political analyst, told Al Jazeera that this hardship has brought thousands to the streets, including former Lukashenko supporters.

“The special thing about this year is that this protest wave has spread to small towns where unemployment is high and they are economically depressed,” Matskevich said.

“In these places people used to support this regime. Now the situation has changed and the authorities got frightened,” he added.

“I voted for him, but now I tell Lukashenko – leave,” Sankevich said. “I’m afraid, but how long we can be afraid? Why should I be afraid of prison if I’m already in prison?”

A tax on those unemployed for six months, known as a law against “social parasites”, was among the issues that first triggered the protests.

Lukashenko suspended the tax for one year in light of the backlash, but the protests have continued.

Those against the tax say it is unfairly punishes people who are unable to find work.

Saturday’s crackdown was the culmination of the Belarussian authorities hardening their position on the protests.

Valentin Stefanovich, a Belarusian rights activist, told Al Jazeera he believe the crackdown was meant to bring down the momentum of protesters over the past few weeks.

“I suspect that the goal is to bring down the intensity of the rallies which we’ve seen during the last month,” Stefanovich said.

On Friday, the Committee to Protect Journalists (CPJ) joined 48 rights organisations in calling for Lukashenko to end the “detention and harassment of protesters, journalists, human rights defenders, civil society activists and members of the country’s opposition party”.

According to CPJ, at least 32 journalists have been detained or obstructed since the beginning of the month.

It is unclear as yet how the crackdown will affect relations with Belarus’ neighbours.

Lukashenko has sought to improve ties with the West against the backdrop of cooling relations with Russia.

He has pardoned several political prisoners, spurring the European Union to lift sanctions against a country once described by the US as ” Europe’s last dictatorship“. 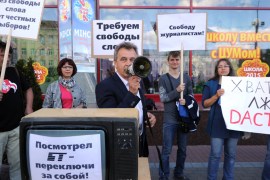 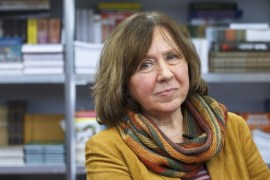 Alexander Lukashenko set to secure fifth term as president, in vote which opposition says will be neither free nor fair.