Abandoning negotiations, President Donald Trump has demanded a make-or-break vote on healthcare legislation in the US House of Representatives, threatening to leave “Obamacare” in place and move on to other issues if Friday’s vote fails.

The move was presented to divided Republican politicians behind closed doors on Thursday night after a day of negotiations among conservatives, moderates and others within the president’s own party.

At the end of it the president had had enough and was ready to vote and move on, whatever the result, Trump’s budget director Mick Mulvaney told politicians.

“Let’s vote,” White House chief strategist Steve Bannon said as he walked out of the meeting.

“For seven and a half years we have been promising the American people that we will repeal and replace this broken law because it’s collapsing and it’s failing families, and tomorrow we’re proceeding,” House Speaker Paul Ryan said, then walked off without answering as reporters demanded to know whether the bill had the votes to pass.

Conservatives have condemned the Republican-drafted bill because it scraps Obamacare, but puts another government plan in its place. They believe healthcare should be left to the free market.

Democrats and moderate Republicans, meanwhile, fear the new bill will take insurance away from millions of people.

Repealing and replacing former president Barack Obama’s healthcare law was one of the major campaign promises of Trump.

Mark Peterson, a professor of public policy at the University of California, said getting the bill passed is “extremely critical” for Trump’s ability to move forward with his agenda.

“Usually when a president comes in, this stage is what we call a honeymoon period. He’s trying to rack up some big wins in Congress to build momentum,” he told Al Jazeera.

“Right now his White House has been described as in a bit of chaos. He has not been doing well in popular support.” A defeat over the healthcare bill “would be quite a setback,” Peterson said.

Millions of Americans would lose coverage next year under the Republican plan, according to a review by the Congressional Budget Office made before last-minute amendments to the bill.

Supporters of Obamacare staged rallies in Washington, DC, Chicago and Los Angeles on Thursday denouncing efforts to repeal the law.

The Republican bill would halt Obama’s tax penalties against people who do not buy coverage and cut the federal-state Medicaid programme for low earners, which the Obama statute had expanded.

The measure would also block federal payments to Planned Parenthood for a year, another stumbling block for Republican moderates. 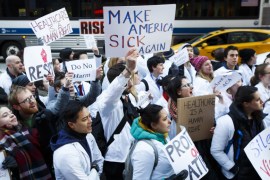 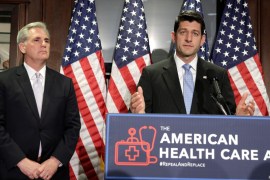 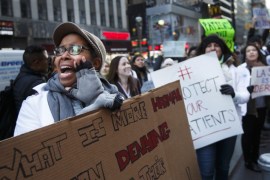