Jerusalem – An Israeli policeman was caught on video on Thursday physically assaulting a Palestinian in the occupied East Jerusalem neighbourhood of Wadi al-Joz.

“We are definitely going to sue that policeman,” she said.

The video of the assault went viral.

“I was heading to work in my truck, which was parked in the Ministry of Interior’s parking lot in Wadi Joz as usual this morning, when I was surprised by an Israeli special force officer who headed towards me and asked me: ‘Why did you hit my car?'” Shweiki, a resident of East Jerusalem, told local media.

Shweiki, a father of five, said he accidently hit the officer’s car in the car park on Tuesday, and had searched for the owner to help repair it, but had been unable to find him.

Gilad Erdan, the Israeli minister for public security, later informed Tibi that the police officer was put on forced leave and would be investigated.

The Israel police released a statement calling the policeman’s conduct “grave and unusual”.

The officer’s identity has not been released. He reportedly is part of a special undercover unit within the Israeli police called “Yasam”, which is responsible for riot control.

Erdan said the policeman’s behaviour was “very grave and worthy of condemnation”.

Rami Othman, a Palestinian lawyer who helped file a complaint, told Al Jazeera that had the incident not been caught on video, the Israeli police would probably have sided with the officer.

“If there was no video … the police would have turned this around. It was a chance,” he said.

Israel claims to have annexed the territory in 1980, but that move is not recognised by the international community. More than half a million Israelis live in Jewish-only colonies scattered across the West Bank, including East Jerusalem.

Jubran added, as of last year, B’Tselem stopped filing complaints with the Israeli police because it is a “system designed to hide facts rather than bring [people] to justice”.

“After 28 years of filing complaints to the Israeli police regarding similar incidents nothing has changed,” he said.

Elsewhere in the occupied Palestinian territories on Thursday, Israeli forces shot and killed 20-year-old Ahmad al-Hittab in the Jalazone refugee camp, according to the Palestinian Ministry of Health. Three others were brought to a local hospital with wounds to the head and chest. 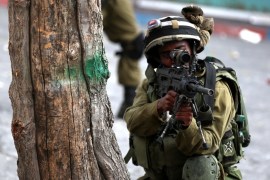