The Syrian army and rebels fought in the capital Damascus and north of Hama on Thursday after the opposition’s biggest offensive in months, underscoring the bleak prospects for UN-led talks that resumed in Geneva.

The offensive seems unlikely to reverse 18 months of steady military gains by the government, culminating in December’s capture of the rebel enclave in Aleppo, but it has shown the difficulty the army faces in defending many fronts simultaneously.

Increased fighting in recent weeks despite a ceasefire brokered in December by Russia and Turkey casts further doubt on peacemaking efforts in Geneva, where talks resumed on Thursday after making little progress in recent rounds.

Ramzy said he held held preliminary talks with each side on Thursday and hoped to begin “substantive discussions tomorrow”.

Ramzy’s boss, UN mediator Staffan de Mistura, was wrapping up a diplomatic tour of the key powers shaping the conflict, which included trips to Moscow, Riyadh and Ankara.

De Mistura is due back in Geneva on Thursday evening to take charge of the negotiations, which have yielded little in four previous rounds.

The UN is aiming for a political deal to end a six-year conflict that has killed close to half a million people and displaced nearly half the country since it started in 2011 with protests against Syrian President Bashar al-Assad’s government.

On the agenda for this round is governance – a political transition, the constitution and elections – as well as “counter-terrorism” at the request of Damascus.

READ MORE: Geneva 4 and the shifting shape of Syria diplomacy

In Damascus, the intensity of clashes around the industrial zone in Jobar on the edge of the central districts of the capital increased after midnight, the UK-based Syrian Observatory for Human Rights reported on Thursday.

A military media unit run by the government’s ally Hezbollah reported clashes early on Thursday in Jobar and a heavy bombardment aimed at rebel positions and movement in the area.

State TV showed a reporter speaking in the capital’s Abassiyin district during morning rush hour, but the road appeared quiet with only one or two cars and a few pedestrians, along with the repeated sound of blasts in the background.

Near Hama, a rebel offensive spearheaded by the al-Qaeda-linked Tahrir al-Sham alliance, but which also includes groups fighting under the banner of the Free Syrian Army (FSA), made new advances overnight and fighting continued on Thursday, the Syrian Observatory said.

Rebels gained control of 11 towns and villages in the first 24 hours of their offensive after it began late on Tuesday, advancing to within a few kilometres of the city of Hama.

Tahrir al-Sham posted videos on its Telegram channel showing rebel fighters in tanks in the Hama countryside and drone footage of a suicide attack on an alleged Syrian army checkpoint in the village of Sawran, near Hama.

Samer Alaiwi, an official from the Jaish al-Nasr FSA group, which is fighting near Hama, said on a rebel social media feed the offensive was aimed at relieving pressure on rebels elsewhere, and at stopping warplanes from using a nearby airbase.

“After the failure of political conferences and solutions, the military operation is an urgent necessity,” he said.

Aid group Save the Children said Wednesday at least 10,000 people had fled their homes in the Hama area. 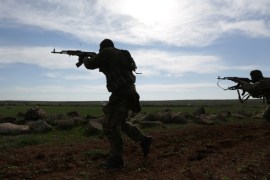 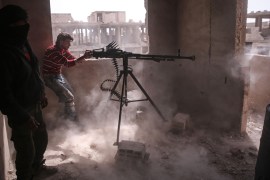 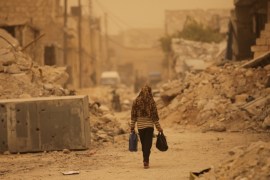 Geneva 4 and the shifting shape of Syria diplomacy

With a parallel track of talks and an amended agenda, the diplomatic process to end Syria’s war is transforming.