By
Asad Hashim
Correction22 Mar 2017
22/03/2017 - This story has been amended to remove references to a planned expansion of the categories of people who would be tried by the military courts, which was dropped in the amendment that was finally passed.

Islamabad, Pakistan – The lower house of parliament voted to renew the mandate for military courts to try civilian “terrorism” suspects for a further two years, raising concerns among activists over allegations of rights violations by such courts in the past.

The military tribunals were established soon after the December 2014 massacre of more than 150 people, most of them schoolchildren, at an army-run school in the northwestern city of Peshawar.

The 342-seat National Assembly voted to pass a constitutional amendment renewing the mandate of military courts to try civilians “who claim, or are known, to belong to any terrorist group or organazation misusing the name of religion or a sect” on Tuesday.

The upper house of parliament is expected to vote on the measure to confirm it into law in the coming days.

Through a constitutional amendment, parliament had voted then to empower the military to try civilians accused of terrorism, but built in a two-year “sunset clause”, during which time the government was meant to introduce legislative changes strengthening the civilian justice system.

“It is, therefore, proposed to continue these special measures for a further period of two years through this Constitution Amendment Bill.”

Since January 2017, when the previous amendment expired, members of the government have been lobbying opposition political parties to support a renewal.

On March 16, Finance Minister Ishaq Dar announced a consensus had been reached with opposition parties on renewing the measure.

The main opposition Pakistan People’s Party (PPP) had previously criticised the government’s bill, saying the “sunset clause” should kick in by the end of a year and that civilian judges should be a part of the process.

Ultimately, however, the PPP relented on challenging the measure on those points.

In 110 cases, the military did not release any information on the trials, including the name of convicts, the crimes they were accused of or, in cases of imprisonment, how long the terms of punishment were.

In the cases where the military did release information on the convicts, it reported that 94.5 percent of them were sentenced on the basis of confessions.

Lawyers and family members of the accused, in interviews and appeals lodged in civilian courts following the convictions, have alleged that their relatives were coerced into confessing, were not given access to lawyers of their choice, or to the evidence being used against them.

Rights groups argue that the military trials do not meet international standards for a fair trial.

“Not only were the trials held in secret, also judgments with exact charges, reasoning and evidence have not been disclosed,” said Reema Omer, international legal adviser for the International Commission of Jurists.

“In 106 of the 113 cases where convicts were given prison sentences, even the names of convicts have not been made public.”

Moreover, the high incidence of confessions – in some cases by convicts who had previously plead “not guilty” in ongoing trials in civilian anti-terrorism courts – has also raised concerns.

“While in regular murder cases, convictions on the basis of judicial confessions aren’t even 5 percent [in Pakistan], 95 percent of convicts have reportedly confessed to their crimes before military courts. In the absence of any safeguards, this raises serious concerns about torture or other ill-treatment,” said Omer.

The majority of those convicted by Pakistan’s military were imprisoned under a 2011 Pakistani law that allows indefinite detention without charge in terrorism-related cases, and had, in some cases, been held in custody without trial for as long as six years, the data shows.

“Not only does this show that the secrecy of military trials was used to ‘legitimise’ past cases of enforced disappearances, it also worryingly highlights how there is complete impunity for perpetrators of the grave crime of forcibly disappearing in Pakistan,” said Omer.

Tuesday’s amendment goes further than the previous law by providing retroactive legal cover to the arrest or detention of any suspect who is subsequently tried in a military court.

Pakistan’s Supreme Court greenlighted the previous constitutional amendment in August 2015, deeming it to be within the purview of the parliament to amend the law, as long as the military trials were subject to “judicial review”.

At least 33 military court convictions were appealed in civilian courts since then, although none of the verdicts has been overturned.

In a landmark judgment in August 2016, the Supreme Court dismissed a set of 16 such appeals, all alleging fundamental rights abuses, adjudicating that fundamental constitutional rights did not apply to those being tried by military tribunals. 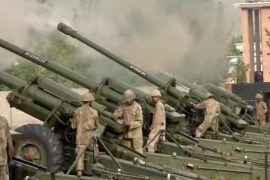 Pakistan’s War: On the Frontline

A look back at Rageh Omaar’s journey into the tribal heartlands to investigate Pakistan’s role in the “war on terror”.